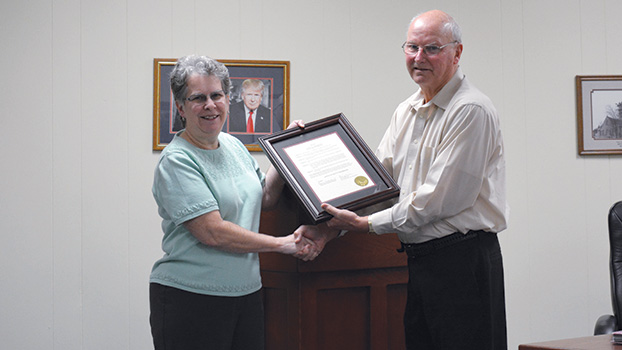 During the Cass County Board of Commissioners meeting Thursday, the board recognized two recent retirees for years of service to the county. Board Chairman Terry Ausra presented retiring Deputy Treasurer Diane Klapchuk and retiring Cass District Library Director Jennifer Ray with resolutions for years of service to celebrate their accomplishments in their positions with the county. Both Klapchuk and Ray were given framed copies of their resolutions.

Klapchuk, a 1974 graduate of Dowagiac schools, graduated from Southwestern Michigan College and Western Michigan University with a degree in business administration. She began her career in Cass County as deputy treasurer in August 2005.

During her 13 years as deputy treasurer, Ausra said she was part of many positive changes in the county, including helping to change the property tax software to Windows-based, implementing new financial software and implementing new dog licensing software.

“It is with a strong sense of admiration and gratitude for the sacrifices she made on behalf of the people of Cass County that we salute Diane Klapchuk on her retirement from the Cass County Treasurer’s Office,” Ausra said.

Klapchuk said she is excited for her retirement and is looking forward to using her time to garden, travel and spend time with family and friends.

“This is a nice honor,” Klapchuk said of the resolution. “I can’t wait to retire, and I really enjoy the work that I did [with Cass County].”

After Klapchuk, Ray was represented with her resolution.

In her 14 years as library director, Ray managed, maintained and upgraded five facilities, budgeted $1 million per year, evaluated, acquired and promoted library materials and services, developed and updated library policies and procedures, utilized state-supported and fee-based electronic resources, and planned and oversaw programs for both adults and children, among other responsibilities, Ausra said.

“Despite all these library and community responsibilities, Jennifer still found time to help and serve the public from the front desk,” Ausra said. “We salute and wish much joy, happiness and excitement for [Ray] as she embarks on her retirement adventure.”

Ray said she looks forward to camping and staying involved with the community during her retirement, adding that she was overwhelmed by the gratitude of the board of commissioners.

“I feel this is a reflection of the wonderful mentors and role models I have in [the board of commissioners’ meeting] room,” Ray said. “It was really a privilege and an honor [to work in Cass County].”