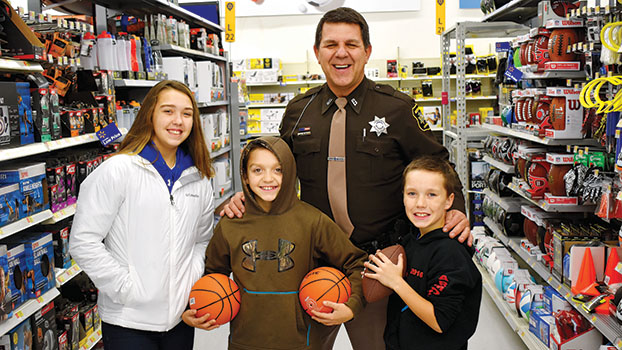 NILES — Santa’s helpers donned the uniforms of local police officers Saturday, as dozens across Berrien County took part in the Shop with a Cop program at Walmart.

Chief Deputy Robert Boyce, with the Berrien County Sheriff’s Department, said the community helped to raise more than $7,000 for the program. The funds covered 10 families and 34 children. Each child got to spend $150 and Walmart offered an additional $25 for the purchase of a toy. The Buchanan Police Department also hosted its own program Saturday. Sgt. Harvey Burnett said about $2,000 was raised, supporting 20 children. Each child got to spend $100, while toddlers selected for the program were allotted $50.

Boyce thanked Reserve Division Deputies Kimberly Fedison and Katie Bauer for organizing the annual event and encouraging donations to support the cause.

“All this is based on community support,” Boyce said. “All the proceeds are donations from various individuals throughout the community that want to give.”

Boyce has been volunteering for the program for five years and said the heartwarming aspect of the effort brings him back each year.

“It’s just the self-satisfaction and joy of seeing the smiles on the children’s faces,” Boyce said. “The smile on the parents’ faces, [too] if they are struggling and need a little assistance. For a kid, $150 is like $1,000 is to me.”

“It’s always exciting and fun to be able to help out families,” Burnett said.

Throughout the morning, police helped the children purchase the things on their Christmas list, piling carts high with toys, clothes and gifts. Ami Smith, a child selected for the program, was so excited he even dressed like a police officer and wore a cap, blue coat and faux mustache.

Getting the chance to shop and relax with police officers is also a tool for building positive community relationships, Boyce said.

“I think it’s a great thing, because they get to spend a couple of hours with law enforcement officers here. They get to see a different side to them,” Boyce said.

While children might normally see an officer in action, Boyce said he hopes this shows that officers can do more than enforce the law.

“This shows a softer side of law enforcement and that they are caring individuals,” Boyce said.

This year, the program saw more officers volunteering than there were families to shop with.

“Everybody has their own family functions to deal with this time of year,” Boyce said. “To see them donate a couple hours out of their own time is wonderful. It shows they truly do have the community at heart.”