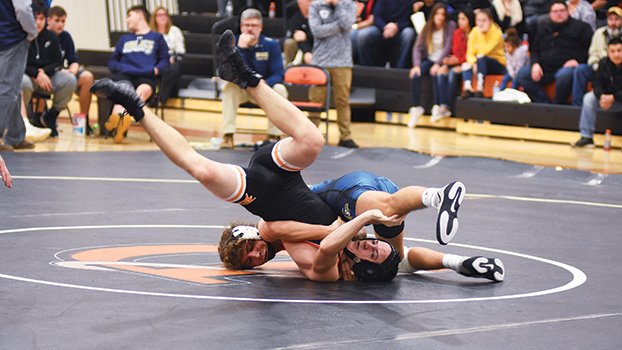 DOWAGIAC — Host Dowagiac, which reached the Division 4 state wrestling quarterfinals last season, got off to a hot start against Niles in a non-conference match Wednesday night.

The Chieftains won two out of the first three bouts and led 10-5 heading into the 125-pound match between the Vikings’ Ryan Franco and Dowagiac’s Korey Kinyon.

Franco needed just 56 seconds to pin Kinyon and Niles went on to win the remaining 10 bouts to earn a 57-10 victory over the Chieftains.

Both coaches felt that their teams wrestled well considering it was the first match of the season. Both saw some rust from their wrestlers, while veteran Niles coach Todd Hesson felt his team was even ahead of schedule in some weight classes.

“I think we wrestled well,” said Dowagiac coach Colin Burandt. “Our thing is just competing and not getting pinned. When we are competing against good teams we need to let them know they are not just going to walk all over us. We showed a little bit of fight. The score might not show it, but I thought we wrestled well tonight. It gives us something to work off of going into the weekend.”

Burandt, who wrestled for Hesson at Niles, preaches many of the same things that his mentor does. Two things that he talks to his team about are staying off their backs and scoring bonus points when they have the opportunity to.

Dowagiac was not successful in the first category against the Vikings as Niles finished with six pins, a technical fall and two major decisions (wins by more than eight points).

Both of the Chieftains’ wins came with bonus points as Jordan Simpson won by major decision (13-2) over Conner Pickens and Dylan Elmore pinned Carson Landon in 1:01 at 119-pounds.

“The first match is always a little bit rough,” Hesson said. “First of all, Dowagiac did a good job. They are well coached and their kids were competing. They made our kids work. It was good on a lot of levels. We were sloppy in some areas, we were rusty in some areas, and in some areas, we are ahead of schedule.”

Hesson agreed with Burandt about the importance of staying away from pins and scoring bonus points.

“Those are the two things that end up coming into play at the end of the year,” he said. “That is what is going to win your duals — staying off your back and getting bonus points. I think our kids did a pretty good job with that.”

Dowagiac will head to Vicksburg on Saturday for its annual team duals, while Niles is headed north to compete in the Lansing Eastern tournament on Saturday.

Brandywine ended up with a split as host Bronson also used forfeits to its advantage to post a 57-24 win over the Bobcats.

Searra Inman, who was left paralyzed following an accident this summer, picked up a pair of forfeit wins for Brandywine.

BUCHANAN — The host Bucks split with Edwardsburg and Cassopolis.

The Eddies defeated Buchanan 45-21, while the Bucks defeated a short-handed Ranger squad 66-11.

Complete results can be found in the Daily Data section on this page.