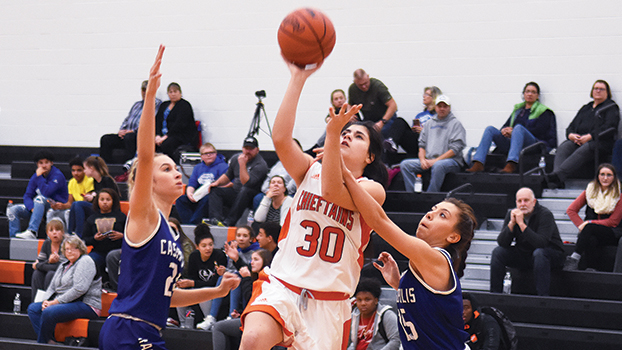 DOWAGIAC — For the first time in many years, the Dowagiac girls basketball team opened the season with a victory.

The Chieftains had a trio of players reach double figures, led by sophomore Allie Conner, as they defeated visiting Cassopolis 60-41 in a non-league game Tuesday night in Dowagiac’s new gymnasium.

Dowagiac had several goals in mind when it took the court Tuesday night, including winning its debut in the new gym and avenging an ugly loss to the Rangers last season.

The Chieftains started out slowly in their loss to the Rangers last year and were determined not to let that happen again.

“We talked about that for the last three and a half weeks,” said Dowagiac coach Brent Nate about winning the season opener. “We talked about getting off on the right foot. We have some people playing new positions and people learning new roles like every team does every year. We talked about the energy level and the effort level that we need to play at.”

Dowagiac played an up-tempo game throughout, using its depth at guard to put continual pressure on the Rangers, who did not handle it well at times.

The Chieftains grabbed a 14-10 lead after one quarter, which they was able to extend to 33-16 by halftime despite the fact that Conner, who finished as the team’s top scorer with 20 points, had to sit for nearly the entire second quarter with foul trouble.

There was no letting up for Dowagiac in the second half, but the Rangers were able to mount a small comeback in the third quarter into the early fourth quarter.

The Chieftains were able to regroup and put the game away by running its offense and taking advantage of Cassopolis’ communication issues and foul trouble for one of its top players — Sophie Fiala.

“The girls have to learn to communicate and play as a team,” said Cassopolis coach Janice Gatson. “We have to be able to do the basics and execute.”

Dowagiac senior Kellyn Daly, who finished with 17 points as she cut to the basket time and time again for easy layups, said it was important for this team to get off to a fast start.

“The Dowagiac girls team has not started out the season 1-0 in I do not know how many years,” she said. “So, it was a big win for our program. Hopefully it will lead to more wins and get people to come out to our games and help us do better.”

Daly said a different mindset for the team in practice helped better prepare them for the opening game. She also said the fans helped keep the team motivated throughout the contest.

“The past three weeks in practice we have been going hard,” she said. “People have come to practice ready to play and win. Last year they (Cassopolis) beat us, so we wanted the revenge and the atmosphere of everybody being here compared to last year. They (the fans) do not know it, but they actually help us. By being here, it makes us play better.”

Besides Gary, the Rangers also got 15 points from Sophie Fiala.

Tamia Parker-Wilson was the third Chieftain to reach double figures Tuesday night as she finished with 12 points.

Dowagiac returns to the court Friday when it travels to Otsego to open up Wolverine Conference play. The game is slated to start at 7:15 p.m.

The Rangers are back in action Tuesday when they host White Pigeon in their Southwest 10 Conference opener.