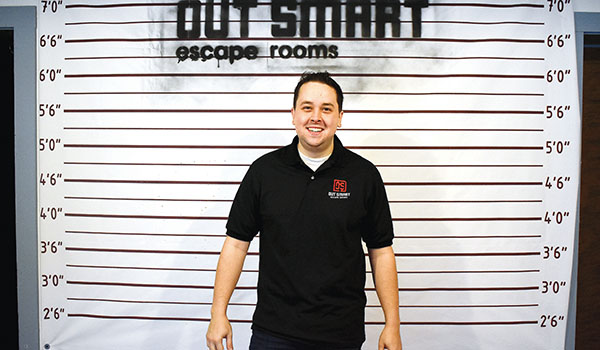 BUCHANAN — There are not many people that could be convinced to pay to go to jail, but with the advent of Out Smart Escape Rooms’ newest attraction called Buchanan Jail, people might be giving it a thought.

Out Smart’s Buchanan Jail escape room opened Nov. 23 in the historic Ross-Sanders house, 105 W. Front St. The escape room is the second to be offered at the location, in addition to the “Find the Spy” attraction which opened early this year.

Business operators Aaron Smith and Matt Herm spent about six months preparing the new escape room, with a goal to keep the authentic feel of a cold, dingy jail cell. The atmosphere is further replicated by the handcuffs that participants start out in.

“This is one of our most anticipated rooms that we have ever opened,” Smith said. “It’s my personal favorite.”

The premise is that participants have ties with mafia madman, Frank Costello, who has recently been jailed for committing numerous crimes. After purposefully getting arrested and locked away in a cell adjacent to their comrade, participants are tasked with breaking free from their cell and helping the mobster escape. The pressure is on, because Costello will be transferred to a maximum-security penitentiary within the hour.

“It’s not your typical escape room where you are locked in a single room and the intent is just to escape,” Smith said. “The intent of this is to break out the boss. It’s going to be a lot of fun.”

Smith said the attraction is ideal for four to eight players. With two rooms now open in the Buchanan location, he said the activity is an ideal team builder for office groups or friends. To keep people from getting stuck during the game, people can ask for clues. However, they might have to earn it by posing for their best mugshot or serenading the people in the cell next door.

“We don’t want people to sit there and get frustrated,” Smith said.

The Ross-Sanders house is the former location to the Buchanan Police Department. Smith said when he and Herm were scouting out areas for their next escape room, the city of Buchanan reached out to suggest the house. The building had been sitting vacant for a number of years and needed some restoration. But Smith said they immediately saw the potential for creating an escape room using the building’s jail cells.

Out Smart Escape Rooms opened about two years ago, with their first attraction at the Tippecanoe Place Restaurant in South Bend. The company’s inaugural escape room was based on the Studebaker family. Buchanan Jail will mark the fifth escape room attraction that Outsmart has opened since then. Outside of Buchanan and South Bend, the company has attractions Elkhart, each with a different theme. In the near future, Outsmart is slating to open a new Titanic-themed escape room.

Smith encouraged those looking for an adventure to give the escape room a try.

“It’s really hard to disclose how much fun it really is until you try it, especially an escape room in general,” Smith said. “A lot of people think that an escape room is you’re tied down or locked up and not at your own free will, but that is not the case. It will definitely get your adrenaline gland pumping in a lot of ways.”