Niles team ‘All in’ with Dendy 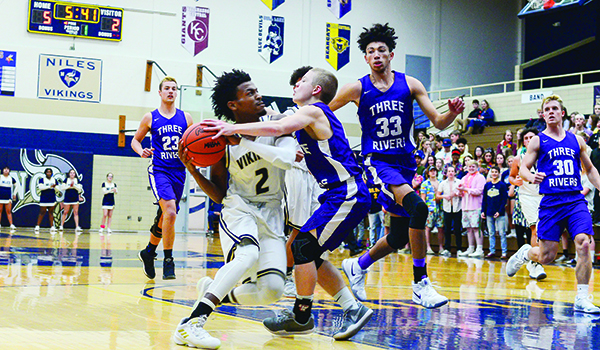 That is the motto of this year’s Niles boys basketball team and Tuesday night, the Vikings lived up to it.

This was Niles’ third game with first-year head coach Tyler Dendy, who joins the MHSAA after spending several years in Indiana at Mishawaka and Marian.

With the win, the Vikings improve to 2-1, but Dendy said his team still has a lot of work ahead of them.

“Our kids are making great strides both on and off the court,” he said. “We are trying to instill our motto in whatever we are doing on or off the court. This is all new for our players — new expectations, new coaching staff and a new way of doing things.”

That new style was evident on the court as Niles exploded out of the gate, putting up a 21-12 lead after the first quarter and entering halftime up 46-20. By third quarter, though, the Viking energy had somewhat dissipated, something Dendy hopes to correct quickly. Niles had a 53-36 lead entering the final period.

“We have yet to put a full game together,” Dendy said. “Our goal is to play a complete four quarters of quality basketball. We also need to maintain mental toughness throughout the game. We have some lapses where we lose focus.”

Senior Austin Huffman, whose three back-to-back 3-pointers in the second quarter erupted the Viking gym, led his team with 14 points. Huffman and Junior Brayden Lake ended the night with four 3-pointers. Lake and Austin Brookins both had 12 points.

“I was very happy with the balance in scoring,” Dendy said. “I was even more impressed with the five charges we took.  It is a game goal of ours to take at least one a game. I thought that our bench players gave us great energy as well.”

Niles will hit the road Friday night to take on Portage Northern in a SMAC West Division contest, which is set for 7:15 p.m.