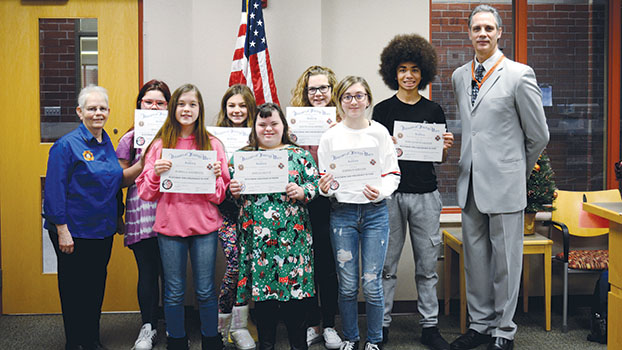 DOWAGIAC — Seven Dowagiac students recently proved that the pen was a powerful tool of democracy and were awarded scholarships from the local Veterans of Foreign Wars for essays written on patriotic topics.

Monday morning, Ann Biek, president of the Auxiliary of VFW 1885, presented seven Dowagiac students with scholarship awards for participating in the Patriot’s Pen and Voice of Democracy contests, hosted each year by the Veterans of Foreign Wars.

“This is a great program,” Biek said. “Our country is important. This program allows students to explore that with these essays.”

The Patriot’s Pen contest, which was incorporated this year into Dowagiac Middle School’s social studies curriculum, is designed for middle school students to express their opinions though essays on a chosen topic, this year’s being “why I honor the flag.” Last year, more than 132,000 sixth through eighth grade students competed in the competition. The first-place winner of Patriot’s Pen nationwide will receive a $5,000 award.

The Voice of Democracy is designed for high school students to complete an audio-essay, with this year’s competition asking students to reflect on “why my vote matters.” Last year, nearly 40,000 ninth through 12th grade students participated in the contest, with the first place winner nationwide receiving a $30,000 scholarship. First place winners at each school will have the opportunity to move forward to the district level, according to the VFW.

The winners, who were chosen by a panel of judges compiled by the Dowagiac VFW Post 1855, said they were surprised and pleased that they won the contest at the school level, and plan to participate in the program again next year.

As the Patriot’s Pen first place winner, Bustamante said he enjoyed writing his essay and reflecting on how he honors the flag.

“I just feel good that I won and knowing that I wrote a good essay,” he said.

As the Voice of Democracy winner, Schultz said she was proud to have participated.

“I just feel like this is a dream,” Schultz said. “I tried my best, and my mom and dad are proud of me.”

Biek said she believes the program benefits students who participate by allowing them to explore a topic through essay, and added that winning at the school and district level is a good resume builder for young students.

She also said she wanted to thank the schools and the students for participating in the Patriot’s Pen and Voice of Democracy programs this year.

“[The students] are our future,” Biek said. “We [at the VFW Auxiliary] really enjoy the program and would love to see more kids participate.”