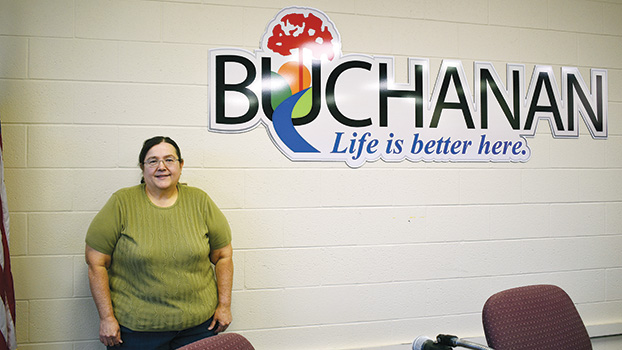 Patricia Moore, the mayor of Buchanan, is pictured in city hall. Moore talked about her hopes for Buchanan during her two-year term. (Leader photo/KELSEY HAMMON)

BUCHANAN — When Patricia Moore was just a teen, she was a member of Buchanan High School’s student council. As part of the governing student body, Moore got the chance to visit city hall and help run a city commissioner meeting.

The impact the experience had must have stuck, because Moore has been running commissioner meetings for nearly 15 years, this time, however, in the official capacity as a city leader. She has served as commissioner since 2004 and for the second time, Moore has also been selected as Buchanan’s mayor.

Reflecting on her next term as mayor, Moore talked about the challenges and triumphs she sees ahead for the city she has called home throughout her entire life.

Among some of the most pressing issues will be creating a plan for a potential future for recreational marijuana. Moore said one of the city’s goals is to integrate the product “without losing Buchanan’s small-town charm.”

Last week, the commissioners voted to withdraw a proposal to opt out of recreational marijuana laws. The vote followed several residents speaking out against the proposal.

Moore said the city is also grappling with long-term infrastructure needs. SAW grant funding, which commissioned a study of the sewer and water systems, has outlined a number of repairs that the city needs to make. Moore said the city is beginning to discuss the results of the study and does not have an official cost at this time.

“[These are] big topics that really will take a lot of vision and people will have to look deep within themselves and see what the city will look like in the next 20 years and that is what we have to aim for,” Moore said. “What will be the best place [to be] so we can honestly say, ‘life is better here’ and mean it.”

As mayor, Moore said she also wants to work to improve the relationship between the city and the downtown development authority. It is among the mayor’s duties to serve on the DDA board. Moore said she hopes to start a fresh relationship that can focus on continuing revitalization efforts.

Moore’s former experience as mayor from 2006 to 2008 saw her work with city leaders to conquer a number of other challenges. In that time, she said she is proud to have helped to bring an infrastructure grant program to downtown Buchanan, which allowed for the businesses to make repairs to their infrastructure. Additionally, she was part of the leadership that helped to list some of Buchanan’s downtown buildings on the state historic registry.

“Now we have not only the downtown registered, but we also have the northwest association,” Moore said. “The idea was looking for ways to attract people to the city. Historic tourism is a big thing that a lot of people are interested in coming to see.”

Moore said she is also proud of the new development she has seen take shape throughout her time as commissioner, including the creation of the Buchanan Art Center.

In her 15 years as commissioner, Moore said Buchanan has experienced a number of changes.

“There’s a lot of things I think we can point to that the town has really a much [more] vital downtown than it ever has,” Moore said.

Other major developments that Moore recognized included the completion of Redbud Fitness & Lifestyle Center, which opened this year. The modern 42,000-square-foot building called for the remediation of brownfield property. Moore praised business owners for tackling the project and revitalizing a vacant and polluted piece of land. It is projects like these that Moore hailed as changing the landscape of Buchanan’s business district.

Outside of her work as mayor, Moore is a podiatrist and has run her own private practice, Patricia Moore DPM, for more than 30 years in South Bend and Buchanan.

Moore is also an active volunteer. Residents have likely seen her performing on the stage of the Tin Shop Theatre, where she often takes on various roles. Moore is also passionate about preserving Buchanan history and is a member of the Friends of the Oak Ridge Cemetery.

Since her earliest days of civic engagement, Moore said she is happy to have had the opportunity to lead her city.

“I have been very thankful that people have kept me coming back,” Moore said. “In a way, it is an extenuation of what I have done professionally. This is another way to give back to my community.”

With changes on the horizon for Buchanan, Moore emphasized that the mayor is only one of the city’s leaders seeking to bring positive change. She recognized Marx and commissioners for working together.

“We have a wonderful staff,” Moore said. “Everyone has a wonderful attitude. They are great to work for. They make sitting up there easy.”