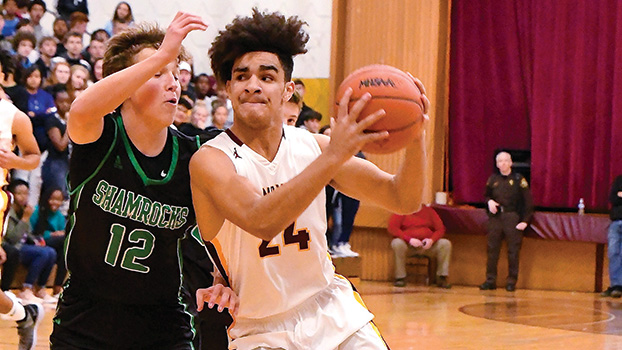 Brandywine’ Jordan Abrams drives to the basket against Berrien Springs in the Bobcats’ 68-57 win over the Shamrocks. (Leader photo/KELLY SWEENEY)

Meanwhile, across town, Niles dropped its SMAC West Division opener to Mattawan 62-44 as the Vikings fell to 1-1 on the season.

The Bobcats trailed 16-13 after one quarter of play, but outscored the Shamrocks 55-41 over the final three quarters to put out the victory.

Brandywine grabbed a 35-32 halftime lead as it exploded for 22 points in the second quarter.

The lead remained three points (48-45) heading into the final eight minutes of play.

The Bobcats (1-0, 1-0 BCS Red Division) poured in 20 points in the fourth quarter while holding Berrien Springs to 12 points.

The Bobcats return to action Tuesday night as they travel to Saugatuck for a non-conference contest set to tip off at 7 p.m.

The Vikings opened the season with a victory over Buchanan last Tuesday night, but were without standout Robert Jordan, who got ejected from the contest.

Niles shuffled its roster for the contest, but visiting Mattawan was too much in the second half for the Vikings.

Mattawan outscored Niles 33-27 in the second half to pull away to the easy victory.

“I am proud of how we battled in the second half. At one point we cut a 20-point lead down to 12,” said first-year Niles coach Tyler Dendy. “Mattawan did a great job to take advantage of their size with very physical play on both ends of the court.”

Nolan Foster scored a game-high 15 points for Mattawan, which also got 14 points from Dexter Shouse and 11 points from Kelby Mabin.

The Vikings return to the court Tuesday night when they host Three Rivers in a non-conference contest set to begin at 7:15 p.m.