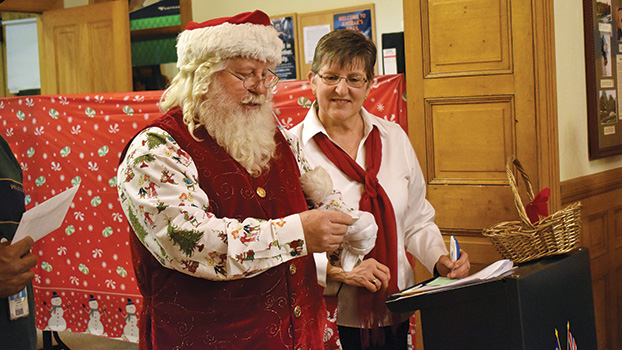 NILES — Nine-year-old Juliana Payne, of Niles Township, could not wait to tell Santa Claus that she wanted a spy kit and dinosaur stuffed animals for Christmas. On Saturday, Payne got the chance to share her wish list with Old St. Nick during the 27th annual Holiday Homecoming.

The traditional Christmas event was hosted by the Four Flags Garden Club at the historic Niles Amtrak Station. This year’s festivities drew more than 50 people to the train station. Those who attended sang Christmas carols and ate cookies. A raffle also took place and included a drawing for cookies, poinsettia plants and two free round-trip tickets to Chicago. At 6 p.m., the crowd gathered outside to give a final countdown before the train station’s holiday lights were turned on.

Mayor Nick Shelton addressed the crowd, reflecting on all the city had accomplished throughout 2018. He recognized Katrina Andrews for raising money to open Ruff & Tumble Dog Park, the first dog park to open in Niles. Shelton also gave a shoutout to Lisa Croteau, the Niles DDA Main Street director for obtaining new decorations to brighten up the downtown and the development of numerous new businesses.

Shelton commended Niles residents for coming together during the historic flood, which swept through southwest Michigan in February, damaging homes and city buildings.

“We had each other’s back,” Shelton said. “I saw strangers collecting debris and shoveling sludge from peoples’ basements. I saw volunteers lining up to contribute to clean up efforts.”

With a new year approaching, Shelton reminded residents to demonstrate the same grit and tenacity they had showed this year.

“I offer you a simple but effective New Year’s resolution,” Shelton said, “the same one I offered last year and the year before: Love your city. Love Niles.”

Several other city officials were in attendance for the festivities, including city council members Georgia Boggs, Jessica Nelson and Gretchen Bertschy.

While the event is a tradition for a number of families, for some it was their first time attending. Payne’s family was one example. Her parents, Jennifer and Jason and little brother, Alistair, 5, visited the event for the first time.

“We love the train station and like coming to local events,” Jennifer said. “We wanted to bring the kids to see Santa.”

“They are super excited,” Jason added.

The annual lighting ceremony at the Amtrak depot is a tradition that started when a scene from “Only the Lonely” was filmed at the train station in 1991. After finishing the movie, the film crew left the lights and the Four Flags Garden Club has helped to keep the lights on ever since.

Karen Persa, the media relations coordinator for the Four Flags Garden Club, helped to pass out cookies Saturday night and said she was proud to see the lights still glowing.

“I’m happy with how everything has turned out,” she said. “It thrills me that after all these years we still have the support from the community.”