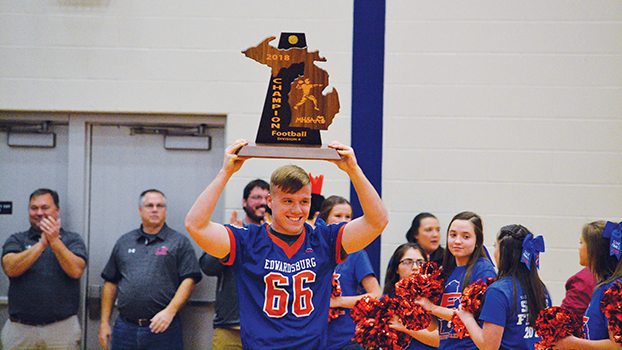 EDWARDSBURG — Students, parents, teachers and proud community members gathered in the gymnasium at Edwardsburg High School to congratulate the Eddies on their first state football championship in the history of Edwardsburg Wednesday night.

The bleachers were packed and the room was loud as each player and coach was recognized for the outstanding season and final victory.

Head coach Kevin Bartz thanked an extensive list of people, including the entirety of the Edwardsburg community, for its unending support and encouragement throughout the 2018 season and during his years as coach. Along with a strong work ethic, Bartz attributed the team’s successful season to the culture of brotherhood within the team, as well as coaching beyond the scope of the football field. His players agreed.

“I think it’s our brotherhood. We’ve had such a good bond, and we all love each other as a family,” said captain Caden Goggins about the season and state championship win. “Being with this group of guys, I’ve learned a lot. Football teaches you a lot about life.”

“Community, and the coaches, and our bond together,” said captain Chase Sager. “I’ll take more than football from this year. The coaches emphasized how to be a better person in your life in general. I’m so thankful for that.”

For Bartz, the state championship marks a pinnacle of his coaching career thus far, but he encouraged his players to keep reaching for more.

“I don’t want these guys sitting around in 20 years talking about how (the championship game) was the high point of their lives,” Bartz said.

A highlight reel from the championship game at Ford Field was played at the assembly. Edwardsburg Superintendent James Knoll also spoke briefly to the importance of the occasion.

“What’s an Eddie?!” Knoll called to the crowd.

“A state champion!” the crowd responded.