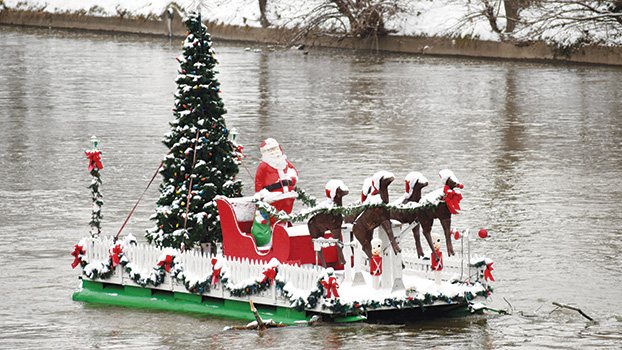 The Niles River Santa is situated near Lakeland Hospital and the Broadway Bridge. The traditional pontoon has been a fixture on the river around Christmas time for 56 years. (Leader photo/KELSEY HAMMON)

NILES — The Niles River Santa returned to his rightful place on the St. Joseph River Sunday. Through January, people can look out from the Broadway bridge to see his brightly lit sleigh and fleet of reindeer bobbing on the water across from Lakeland Hospital.

The holiday tradition has been carried on by East Main Gardens business owner Mike Peters and volunteer Larry Pickles. For years, the pair has banded together with a group they refer to as “Santa’s Helpers.” Each year, they push the 24-foot pontoon out on to the water.

“This year, the weather was perfect,” Peters said.

However, that has not always been the case. Peters and Pickles have a collection of memorabilia chronicling the 56 years of keeping the tradition alive, including photos, newspaper clippings and letters of thank you from residents. It is a testament to the hard work that volunteers endure every year, from ice on the river to log jams and thick rolling fog. However, Pickles and Peters are more apt to talk about why they carry on the tradition than the work it requires.

The Niles River Santa’s maiden voyage was in 1962, when East Main Gardens business owner Roy Peters, Mike’s father, thought of the idea. Roy wanted to bring a little Christmas magic to the children in the hospital, which was at the time called the Pawating Hospital. With the children’s ward looking down onto the river, Peters and Hank Hanson, Willie Huss and Pete Williams, set out to put the floating Santa in their view.

“It’s still a great thing,” Peters said. “I think all of us that are involved in it had that same vision. We want to do it for the community and the people in the hospital. Obviously, people like it. I know my dad would be happy.”

A quick scroll through the Niles River Santa Facebook page reveals just how much the floating icon means to Niles residents. Since posting about Santa’s recent launch onto the river, many have shared their memories of seeing Santa on the river, while thanking the volunteers who get together to continue the tradition every year.

Throughout the years, local businesses have contributed to keeping the tradition going. Pickles commended Lowe’s store manager Craig Brechter for donating supplies to the effort.

“It’s those folks behind the scenes that help keep Santa on the river a yearly tradition,” Pickles said. “A heartfelt thank-you to Craig and his staff at Lowe’s for supporting the community.”

With generations of Niles residents looking forward to the tradition every year, Peters said he knows it is something volunteers must continue. Peters’ sons Michael and Matt and Pickles’ daughter Erika have helped with the tradition for a number of years. With so many involved, Peters and Pickles believe there is enough passion to keep Santa afloat for years to come. It seems the community would not have it any other way.

“We are still going to have to do this for another 20 years, so we can keep [the generations of followers and] their kids happy,” Peters said.