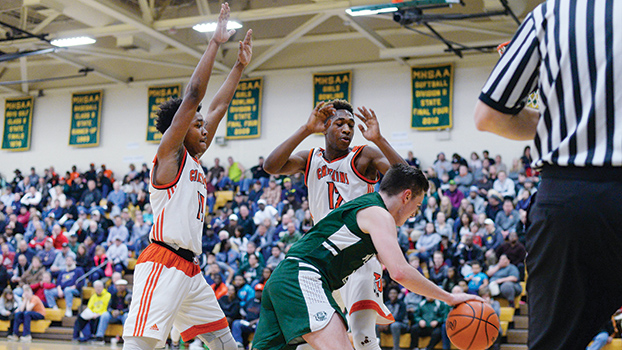 BENTON HARBOR — It was déjà vu for the Benton Harbor Tigers in its season opener Tuesday night.

Carlos Johnson delivered the game-winning shot against visiting Dowagiac in the Tigers’ 67-66 victory. His shot was reminiscent of his basket in last year’s Class B state championship game against Grand Rapids Catholic Central.

The Chieftains, who lost to Benton Harbor in last year’s regional, led twice by two points in the final 17.3 seconds.

D.J. Lanier hit one of two free throws with 17.3 remaining and with 8.8 left before Johnson delivered the game-winning shot.

The Chieftains were red-hot from beyond the 3-point arc Tuesday night.

Dowagiac (0-1) connected on 10 triples, led by Shaquan Stanback, who had four of them as he scored a team-high 20 points.

The Chieftains led 10-9 after one quarter, but were outscored 25-19 by Benton Harbor in the second quarter as the Tigers took a 34-29 lead into halftime.

Dowagiac outscored Benton Harbor 37-33 in the final 16 minutes of play, but were unable to overcome the halftime deficit.

Both teams finished the night with 23 baskets. Dowagiac had 10 3-pointers to Benton Harbor’s eight.

Johnson finished with 23 points and 15 rebounds, while Justin Brown scored a game-high 26 points.

The Chieftains are back on the court Friday night as they host Paw Paw in their Wolverine Conference opener. Tipoff is set for 7:15 p.m.

Dowagiac lost to Benton Harbor in the JV contest 71-32.