Commissioners withdraw ordinance that proposed opt out of recreational marijuana 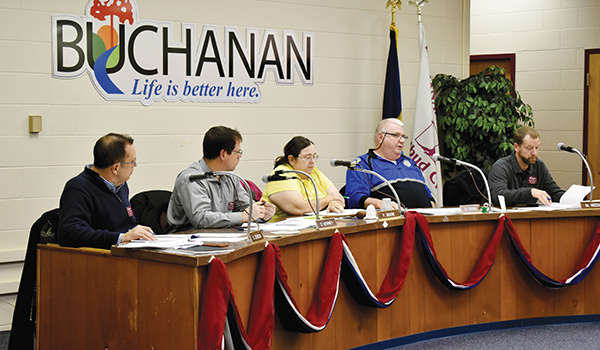 BUCHANAN — Buchanan city commissioners unanimously supported the decision to withdraw an ordinance that had proposed opting out of Michigan’s recreational marijuana act Monday.

The meeting marked the first reading of the proposal. Following the decision to withdraw it, commissioners decided they want to first host public hearings before deciding whether they want to officially opt in or out of the law.

Buchanan Mayor Patricia Moore said she felt that opting out of recreational marijuana at this time would be sending the wrong message to the people of Buchanan.

“There is so much unknown about this recreational marijuana and we have little feedback coming from the state,” Moore said. “[But] my sense was it was more important to say that we acknowledge what the vote is. We have time to figure all this out. Even though there was the suggestion that this would be a door shut temporarily … that’s not how people took it in Niles.”

The city of Niles proposed a similar ordinance to create a prohibition of future marijuana development, which was approved by city leaders earlier this month. The resolution saw backlash from a number of Niles residents who felt it was a vote against constituents’ wishes.

City manager Bill Marx said he called the proposal up for a vote in an effort to protect the city’s liability. Marx said he does not want potential marijuana businesses to feel that all they have to do is invest in land or property to get approval. He said they saw this happen in regards to medical marijuana, where one business thought the investment guaranteed city approval, which was not the case.

“What we are trying to do is reduce some speculation and get it under control [because] we have a lot of things to discuss,” he said.

Though the proposed ordinance was shot down Monday, Marx said he has faith in the city commissioners’ decision.

“If the commission felt that it was too early to have this that more information that people needed to be better educated, including commissioners, which I totally understand,” Marx said.

Prior to their vote, several residents addressed commissioners on the topic.

“Recreational is a year away. There doesn’t need to be any decision made,” Vigansky said.

He also criticized Marx for presenting commissioners with the proposal on such short notice.

Others echoed similar sentiments that it was too early to cast their votes on opting out of the law.

Four people spoke about the issue. Three advised the commissioners not to support the ordinance and one said she was in favor or commissioners voting to opt out of the law.

Cindy Benson, of Buchanan, said she was wary of recreational marijuana.

“I know that the city voted in favor of it [recreational], but a lot of us voted against it,” Benson said. “But this recreational stuff, I’m sorry, the first time it hurts someone I know … I’m going to be so angry, I will be spitting nails.”

However, after listening to the discussion Monday night, Benson said she supported commissioners’ decision to withdraw the ordinance and wait on making an official vote to opt in or out.

Marx said he does not have a set time frame for when the commissioners will host public hearings, but he expects it to be within the next year as the state works to create recreational marijuana laws.

Marx commended newly elected commissioners Sean Denison, Cameron Downey and Mark Weedon for jumping straight into the issues at the forefront of the city.

“We had a good discussion here tonight. If someone believes we were shot down at the staff level, I don’t look at it that way,” Marx said.