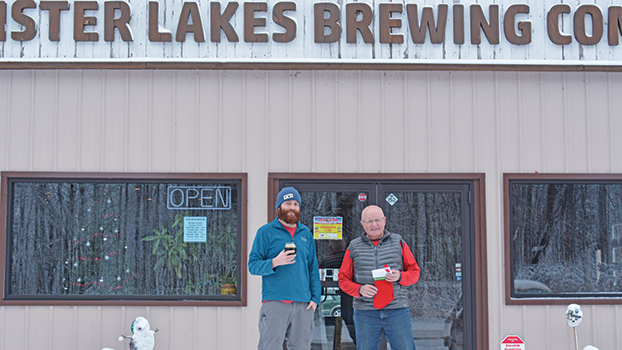 SISTER LAKES — The ghosts of Christmas past, present and future will be visiting the Sister Lakes Brewing Company next month to complete a holiday tradition.

For the second year, Sister Lakes Brewing Company, 92500 County Road 690, Dowagiac, will host a dramatic reading of Charles Dickens’ classic holiday tale, “A Christmas Carol.” The reading, which will be performed by professional storyteller Greg Weiss, will take place from 6 to 9 p.m. on Tuesday, Dec. 11 at the brewery. Tickets are $8 for adults and $5 for children 13 and under. The ticket price will include the performance and light refreshments. Beer, wine and additional food will be available for purchase at the event.

“This is a fun event that is a part of our community outreach,” said Jerry Morin, who founded the brewery with his children. “This is a way for us to get the community in the Christmas spirit.”

For Jerry Morin and his family, hosting the event for a second year is signaling the start of a Christmas tradition for the brewery.

“We tried this last year and had a full house. People loved it,” said Sister Lakes Brewing Company Brew Master Brian Morin. “We are hoping to do this year after year. We are hoping that people keep coming back and that we reach new people every year.”

Greg Weiss, who will be performing the reading, is a family friend and former educator of the Morins. He has been working professionally as a storyteller for 16 years and has travelled the country performing his rendition of “A Christmas Carol.”

“It’s really fun. He reads the carol and does all the characters,” Jerry said. “It’s a really well told story.”

Weiss, who currently resides in Chicago, said he was excited for the upcoming event at Sister Lakes Brewing Company, because it is one more chance to share his love of “A Christmas Carol,” which he said was his favorite story from his childhood.

“Every time I do ‘A Christmas Carol,’ even though it has been more than 100 times now, I find something new and more meaningful,” he said. “This is the story of the Christmas season that precedes the commercialization of the holiday. This is a story of human redemption that is so meaningful.”

“We want to be a service to the community. We want to include everyone, and that includes families,” Jerry said. “[The reading of ‘A Christmas Carol’] is another way for us do that.”

“We really are a family environment that just so happens to be a brewery,” Brian added. “We really want to provide a place for our community to go, especially around this time of year.”

Both the Morins and Weiss said they hoped the Sister Lakes community would come out to the reading on Dec. 11 to help cement the tradition of “A Christmas Carol” at Sister Lakes Brewing Company.

“[Residents] should come out and get into the Christmas spirit if they aren’t already there and meet with their friends, families and neighbors,” Jerry said. “It will be a really good show.”

“I love doing this more than anything else for the tradition,” Weiss added. “I’ve gone all over doing this, and it becomes just as much a tradition for me as for the people who will come and hear the performance year after year. … It is a marvelous tradition, and for me, the best part of the holidays are the traditions we make that give it more meaning.”

Tickets are available for purchase at the brewery. For more information, call the brewery at (269) 332-5135.