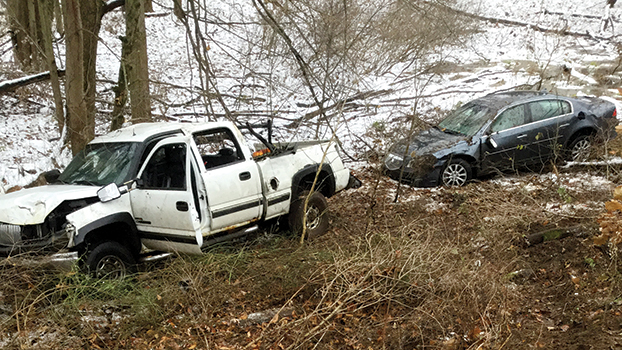 Two vehicles hit the same patch of slush on Hoffman Street in Newberg Township Saturday, and landed more than 20 feet off the roadway in a ditch. (Submitted photo)

NEWBERG TOWNSHIP — A collision forced two vehicles into a ditch approximately 20 feet off the road Friday, according to the Cass County Sheriff’s Department.

Deputies were called to the scene at Hoffman Street east of Sodaman Road at 2:19 p.m. Saturday.

Initial investigation shows that Kaylee Thieme, 18, of Vandalia, was driving a white Chevy pickup truck westbound on Hoffman Street when the vehicle hit a large area of slush. Thieme’s vehicle rolled three times and went off the road. Leslie Thieme, 72, of Vandalia, was a passenger in the truck.

Minutes after the truck left the road, a Buick also driving westbound on Hoffman Street hit the same patch of slush, rolled south off the roadway, and landed near the white Chevy.

Both Kaylee and Leslie Thieme were transported to Three Rivers Hospital by Newberg Ambulance Service for their injuries.

The driver of the Buick, whose name was not released, received no injuries in the crash. She was checked by ambulance personnel and released at the scene.

Seatbelts were worn during the accident.

Newberg Ambulance and Newberg Fire Department assisted with the crash.