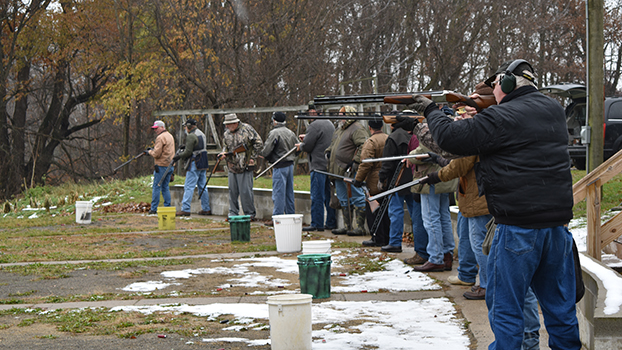 EDWARDSBURG — Since its establishment in 1946, the Edwardsburg Conservation Club has not seen many improvements, at least not to the main clubhouse. Membership has grown and fluctuated like any longstanding club or organization, adjustments and modifications have been made periodically, but until 2017 the club was still covered in a shabby, 1960s hue.

For the last year, however, the ECC has enjoyed a few updates to its interior and presentation, as well as some renewed interest in continuing the legacy of firearm safety and environmental care, according to club president Brenda Mortimer, making a few changes made a big difference in attracting new members.

“We were looking around trying to brainstorm ideas for what to do to the place. This really does look so much better than what it was,” Mortimer said.

A few crafty club members with an eye for design added some paint and wood paneling to the downstairs for a homier feel, found some new mounts to hang on the walls, and turned what was once a stuffy basement into a leisurely dining and bar area. The aesthetic changes didn’t stop with the interior design, however. The clubhouse finally got Wi-Fi, as well as a new TV to watch the trap shooting from the comfort of the heated bar area. The Wi-Fi alone became a big selling point for new and old members, according to Mortimer.

“It’s getting harder and harder to get young people interested, but we want to keep this place up for who comes next,” Mortimer said.

ECC has seen a slight rise in membership since the renovations were made, though a direct correlation between the rise in new, younger members and the building updates is not strictly proven. Even so, Mortimer and other club members, like Jerry Bolock, are pleased something spiked an interest in new membership. In the next couple of years, Mortimer and Bolock hope to add more improvements and amenities to the grounds.

“We want to make sure we’re giving the young people the skills we had growing up. Not everyone grows up around guns and the outdoors like we did,” said Bolock.

Keeping the club and clubhouse relevant goes a long way for the club’s mission, according to Bolock and Mortimer. They hope to destigmatize the use of firearms and educate the public on how to safely handle them, as well as renew the overall public interest in being outdoors. One of the ways the club keeps outsider interest is by giving back to the community and keeping their regular activities going. Bolock noted that some clubs’ activity peters out during the winter month, but ECC stays open and active.

Coming up on the holiday season, ECC holds its own events like the annual turkey shoot, a trap shooting competition to win turkeys for Thanksgiving. But ECC also gets involved in community efforts to keep locals fed. ECC contributed food items to the Edwardsburg Food Pantry, and also adopted a family to purchase gifts and necessities for Christmas. For Mortimer and Bolock, shooting and the wilderness bring club members together, but giving back to the community is what makes being a club worthwhile.