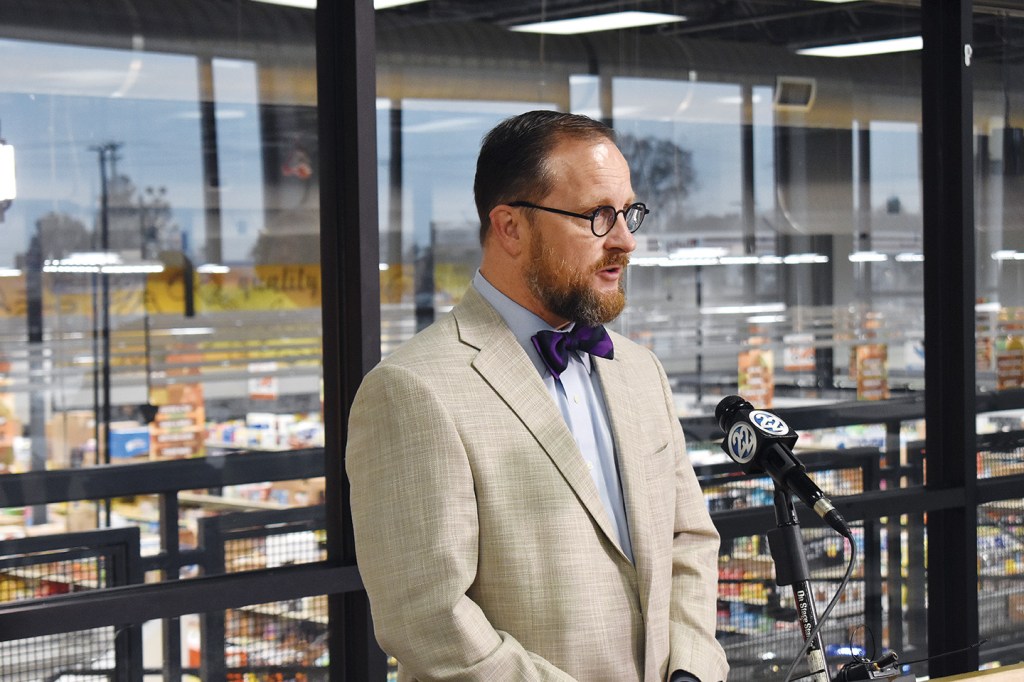 Rob Bartels, the president and CEO of Martin's, addresses the press Wednesday about a recent acquisition of the supermarket chain. (Leader photo/KELSEY HAMMON)

SOUTH BEND — More details about the acquisition of Martin’s by SpartanNash were released during a press conference Wednesday morning at the supermarket location on Mayflower Road in South Bend.

Rob Bartels, president and CEO of Martin’s, said employees and customers should not expect any major changes.

“If we had chosen somebody else, then we would be changing wholesale supply and all kinds of things,” Bartels said. “Those things are not happening. The programs we have in the store, the way we get our trucks, the details of business don’t change at all.”

He did say that there will be a return to a private label program. Other notable impacts he described as being “underground.”

“Most of [the changes] will mostly have to do with technology, systems and some methods,” Bartels said. “It does not change what we do. It changes how we do it.”

A deal between Martin’s and SpartanNash, a Grand Rapids company that operates grocery stores, warehouses and commissary, is expected to close Dec. 31, impacting 21 stores across north central Indiana and three stores in Michigan, including the Niles location.

The Martin’s name and the Martin’s brand products will also stay in place, along with the Starbucks and Side Door Deli that customers can find inside the store.

Bartels declined to say what the price tag on the acquisition was, but said that the decision was not due to financial pressure. When asked why this was the right time for the transition, he described how the acquisition could provide some security for the future.

“One of the things that will remain demanding for retailers in general is the increase in cost curves and gross margin compression,” Bartels said. “It does not take many adjustments to make things demanding. That is the overall main challenge of a business like ours, though nothing about this is urgent or crisis or anything like that.”

As far as Martin’s legacy for giving back to their local communities, Bartels said he expects this to continue as well. He described SpartanNash as company that shares a similar stewardship goals and a drive for customer service.

At the core, Bartels emphasized that the major components of the supermarket chain will remain the same.

“The smooth transition between where we are right now in ownership and where we are in a few weeks is going to be seamless,” Bartels said. “We are taking a tree and planting it in more fertile soil. What this does for our business is it takes it out of small family ownership and nests it within a larger organization.”