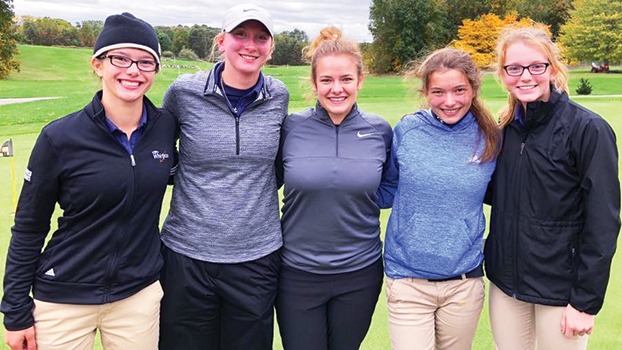 Niles accomplished two of its goals by returning to the state finals and earning academic all-state. (Leader photo/File)

It is the third consecutive year that Dowagiac has earned academic all-state honors.

“Like I have said in the past, we talk about being student-athletes with the student coming first,” said Dowagiac coach Bob Turner. “We have been lucky to have golfers that don’t need to be pushed, they worry about grades first. Another thing we have is great supportive parents that pay attention to both the grades and the golf.”

Due to the fact that senior Peytin Lee was unable to play due to injury, Dowagiac had two freshmen among its five regional competitors.

“It is nice, first that we got the award, and second, that we have freshmen that can keep the expectation going in the years to come,” Turner said.

“I’m so proud of these girls,” said Niles coach Dan Brawley. “They not only got the job done on the golf course, but also did excellent work in the classroom. These girls are taking college and A.P. courses, the most rigorous classes that Niles Community Schools offers.”

Brawley said that Niles accomplished what it set out to due back in August.

“Although extra-curricular activities are important to all of these players, each of them put their academics first,” Brawley said. “All-state honors and a trip back to the state finals were two goals that are players had at the beginning of the year and they accomplished both.

Academic all-state is based on the GPA of the five competitors who competed at the regional tournament.

Players with all A’s receive bonus points based on their grade level (i.e. sophomores receive 4.05, juniors 4.10 and seniors 4.15. The eighth-grade transcripts are used for freshmen.