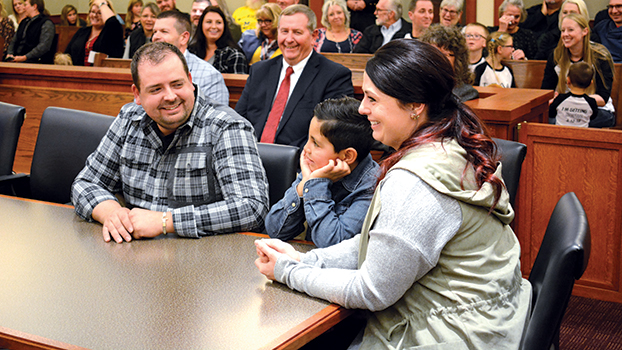 CASSOPOLIS — Standing inside of the Cass County Circuit courtroom Tuesday, the newly named Aiden Pollard grinned ear to ear as he popped open the buttons on his denim shirt, revealing a black T-shirt underneath printed with the saying “officially a Pollard.”

“This is a very important day,” he said. “This is the day of my adoption.”

Cass County hosted its 16th annual Adoption Day Tuesday at the Cass County Law and Courts building in Cassopolis. Adoption Day is a nationwide event during which participating courts — more than 30 in the state of Michigan — finalize adoptions, hold parties for adoptive families and educate the public about the adoption process. Michigan Adoption Day is co-sponsored by the Michigan Supreme Court, Michigan Department of Health and Human Services, Michigan Adoption Resource Exchange and the Child Welfare Services Division of the State Court Administrative Office.

The Harrisons, whose adoption was finalized in April. Pictured are Elena, Wade, Elise, Elliott and Emmitt. (Leader photo/SARAH CULTON)

During Tuesday’s Cass County event, the adoptions of three local children were finalized.

Presiding over the adoptions was Cass County Probate and Chief Judge Susan Dobrich, who was responsible for bringing Adoption Day to Cass County. Many state and local officials were also in attendance at the event including State Rep. Aaron Miller and Sen. John Proos.

Among the families who finalized adoptions Tuesday were Tabitha and Michael Pollard, who adopted Michael’s nephew, Aiden. Aiden has been living with the couple for nearly four years. With so much time gone by, Michael said that Tuesday’s Adoption Day meant “everything” to his family.

“This has been a long, long time coming,” Michael said. “I’m really looking forward to the future. … I’m the last male in my family to have the last name Pollard. So, now we have a son to carry on the family name.”

Tabitha said she was equally excited, and it showed in the moments during the adoption finalization, when she had to wipe a set of happy tears from her eyes.

“This is the first day of the rest of our lives as a forever family,” she said. “This is so exciting.”

“We can finally try to make their lives more normal,” Shannon said. “We can give them more of a sense of permanency to know that they don’t have to go anywhere else. They are home now for good.”

Dobrich closed the ceremony by congratulating the adoptive parents and wishing them well for the future.

“To the adoptive parents, thank you for your sacrifice and willingness to provide children with a forever home,” she said. “The process of raising children is exciting and challenging and difficult at times and can be filled with great joy. That joyful experience begins in earnest today.”