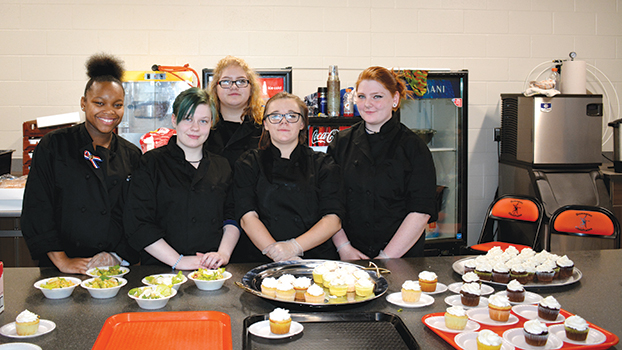 DOWAGIAC — Thursday afternoon, a group of Dowagiac Union High School students stood behind a counter full of salads and cupcakes waiting to serve their next group of diners, all of whom were senior citizens.

“This is a really good event for students to learn community involvement,” said Dowagiac Union High School teacher Andy Kruger. “It’s really good for the students to give back to the local senior population.”

According to Kruger, Thursday marked the 20th year the senior luncheon had been taking place and the eighth year he and fellow teacher Matt MacQuillan have been organizing the event. For the first time, the luncheon was hosted in the high school’s new gym, which was constructed as part of a bond project passed by district voters in 2015.

“This is fantastic. We are going to be doing this here every year now,” he said. “It’s great to get people into the new gym and to see what the students and the school is doing.”

Outside of showcasing the new facility, Kruger and MacQuillan said the senior luncheon was an important event for seniors and students alike, as it prompted an intergenerational connection between the two groups.

Both the seniors and students who were at the luncheon Thursday said they enjoyed the event.

George, 75, and Pat, 73, LaPorte, of Dowagiac, have been coming to the senior luncheon for several years. They said they always find the event to be a unique and kind gesture for seniors in the community.

“This is something a lot of seniors really enjoy,” Pat LaPorte said. “We really like it and think it is great.”

For the students who served the seniors, several said they appreciated the opportunity to give back to their community.

Tenth-grader Katie Binns said working the luncheon for the first time made her feel good about volunteerism and inspired her to volunteer with area seniors again in the future.

“We are bringing people together — people that don’t even know each other. I think that is really nice,” she said. “This is just really fun, and it feels good to know that we are helping people.”

With Thursday’s luncheon wrapped, Kruger said he hoped that everyone who attended the senior luncheon enjoyed themselves and that he also hopes they will attend the next luncheon on April 18, 2019.