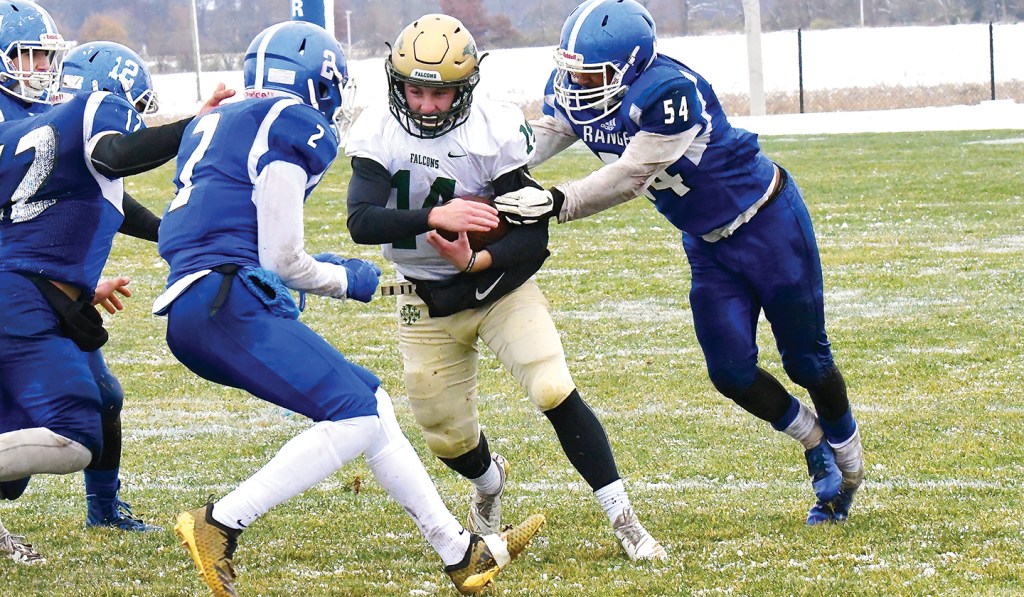 CASSOPOLIS — For the second time in two years, Cassopolis be playing on Tony Dungey Field at Jackson High School with a chance to play in the Division 7 championship game.

The Rangers, who are 12-0 for the first time in school history, punched their ticket to the semifinals by making a goal-line stand against Monroe St. Mary Catholic Central last Saturday at William F. Scott Field.

Cassopolis stopped Catholic Central inches from the goal line as time expired to hold on to a 23-22 victory and a match up with Madison Heights Madison (12-0) in the semifinals.

“That was one for the ages man,” said Cassopolis coach Dan Purlee about the goal line stand. “We came up with the stops when we needed to.”

The Rangers have advanced to at least the regional finals in each of the last four seasons.

Two years ago, the Rangers were eliminated by Detroit Loyola 54-22.

While much is made of Cassopolis’ offense, it is the defense that has been stellar for the Rangers throughout the season.

The Rangers have allowed just 30 points through the first 11 games, 22 of which came against Catholic Central.

Cassopolis has is averaging 48.3 points per contest.

“We hit on some plays,” Purlee said. “That is what we do. We made big plays offensively.”

Madison Heights reached the regional championship game in 2017 before being eliminated by Detroit Loyola 45-12.

The Eagles have played in one state championship game, which it lost to Menominee.

Madison Heights has been steamrolling through its playoff opponents, outscoring them 127-7 in wins over Shrine Catholic, Detroit Loyola and Riverview Gabriel Richard.

EDWARDSBURG — If Edwardsburg is going to spend Thanksgiving weekend in Detroit at Ford Field, the Eddies will have to get past a familiar foe.

Standing in the way of a second consecutive trip to the Division 4 state championship game is the team that defeated Edwardsburg in the 2017 title contest — Grand Rapids Catholic Central.

Edwardsburg advanced to the state semifinals for the third straight season with a a 56-21 win over Holland Christian in the regional championship game last Saturday.

and a spot in Saturday’s state semifinals. It was the third consecutive regional title for the Edwardsburg and Grand Rapids Catholic Central will renew their rivalry at 1 p.m. at Vicksburg High School.

The Eddies were defeated by the Cougars 42-31 last year. Grand Rapids Catholic Central defeated the Eddies 46-31 in the Division 4 semifinals in 2010 in a game also played at Vicksburg High School.

“Once we knew we were in Division 4 and looked at the brackets, obviously where we wanted to be was matched up with them because we knew they have a great team again,” said Edwardsburg coach Kevin Bartz. “Whether we were on their side of the bracket or they were on the opposite side, we knew we had to run into them at some point.”

The Cougars come into Saturday’s game with an 11-1 record. Their lone loss came back in week No. 2 against Saline, 17-7. Saline is a state semifinalist in Division 1.

“They are an extremely good football team again,” Bartz said. “They do not have a Noah Fugate (running back) or Jaylen Mayfield (offensive lineman) they had last year, but personnel wise they are so fundamentally sound. They are physically quick and strong. They are a lot like us because they do not hurt themselves usually. Even though our style of football is completely different our discipline and what we are trying to accomplish is very similar. It should be a great matchup again.”

Bartz said in order for the Eddies to turn the tables on the Cougars they must do a better job against their run.

“I went back and watched the film from the state finals last year and they were pretty much able to run the ball at will and gain big chunks,” Bartz said. “We have to be able to do a better job on first and second down, so that we put them into a situation where we know they are going to pass. We really didn’t do that in the state finals. Offensively, we broke big plays against them, but we were not consistent. We need to be able to consistently pick up the three to five yards every play.”

Mistakes could also determine the outcome according to Bartz.

“Obviously, in a close game, turnovers and penalties always pay a big part,” Bartz said. “Our offense is not built to take a 10- or 15-yard penalty and have a first-and-20. We have to make sure we limit those.”