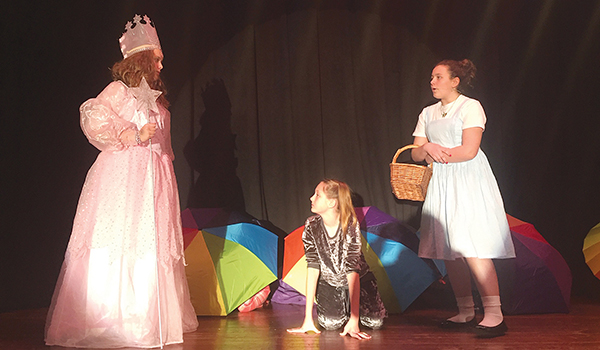 NILES — Eastside Connections students are following the yellow brick road to magic lands beyond this week as they perform the classic, “The Wizard of Oz” for their fall production.

The show will debut at 7 p.m. Friday night, with following shows at 7 p.m. Saturday and 2 p.m. Sunday at the school. Tickets are $5 and can be purchased at the door or in advance at the school’s office. Proceeds will go back into the school’s drama program.

Director Meg Bartlett said students have been rehearsing the show since September. Bartlett said the idea to bring the “The Wizard of Oz” to the Eastside stage was partially inspired by one of the school’s kindergarten teachers, who wanted to give the younger children a chance to get involved in a production.

Bartlett said she knew there would be plenty of opportunities for kindergarteners to take part in the play as munchkins. Many students showed interest. The play includes the participation of approximately 60 students.

While those who come to see the production will recognize the beloved tale of Dorothy trying to find her way home from Oz, Bartlett said the students also put their own signature spin on the classic.

“I just hope [the audience] likes our version and how we brought it to life,” Bartlett said. “We did some fun things and brought it more to life. I hope the audience likes those little quirks and changes that we have made.”

For students, Bartlett feels there is a lot to be gained from taking part in a school production. She said getting up on stage may feel like a challenge at first, but can give them the confidence to speak in public. Many, she said, also make new friends throughout the rehearsal process and focus their time on something outside of TV or videos games.

“I always thought she [Glenda] was super cool,” Riggenbach said. “When I found out I got to be her it was really cool and she’s my mom’s favorite character.”

Riggenbach said she likes that her character plays a crucial role in getting Dorothy safely back to her family in Kansas.

Riggenbach said she had learned a lot from her time acting in the school plays.

“First of all, you learn a lot of public speaking skills which is a huge thing, especially going to Eastside where we do so many presentations,” she said.

The eighth-grader also said the experience had taught her a lot about supporting her classmates.

“When someone messes up … it shows you the importance of teamwork,” Riggenbach said. “It shows you how you need to support each other and not make fun of them because they don’t know their lines.”

First-time actor Adam Jackson, a sixth-grader, also felt being part of the production was a worthwhile experience. Jackson will be taking on many roles during the show as a number of extras, including a jitter bug and a munchkin.

“It’s really fun,” Jackson said. “It’s the first play I’ve ever done and I get to be with other people and have a great time.”

The movie “The Wizard of Oz” is also his mom’s favorite, he said.

Reflecting on their rehearsal since September, Bartlett believes the play displays, hearts, brains and courage.

“These kids have worked so hard,” Bartlett said. “They have such amazing talent and I just want them to see what we are capable of.”