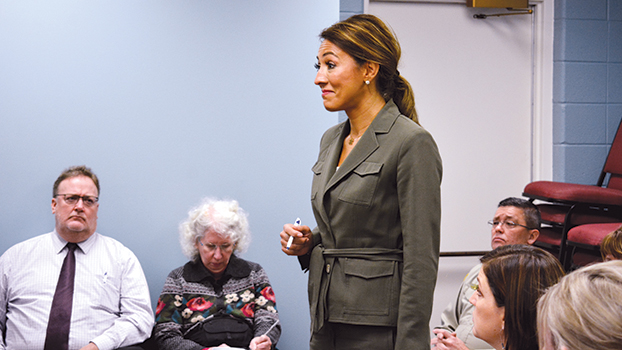 CASSOPOLIS — After more than 15 years of promises from the Cass County Board of Commissioners, employees in the county administration annex building in Cassopolis are requesting a change.

During Tuesday’s Committee of the Whole meeting, county employees that work within the county annex building, including the Treasurer’s Office and the Clerk’s Office, confronted commissioners with a letter detailing health and safety concerns at the building in addition to suggested solutions to those problems. The concerns and solutions were discussed at a Nov. 5 meeting with Cass County elected officials and department heads.

Concerns listed in the letter include:

• Over the past 15 plus years, the board of commissioners have promised annex employees that they would be moved out of the annex into a more appropriate facility, but have yet to do so.

• A lack of windows in work spaces, which employees said has a “punitive feel” when compared to the newer Law and Courts building.

• Because annex employees could expect to be moved into a more appropriate space within a reasonable period of time, upgrades, replacements, a security system, a higher grade of cleaning and other health and safety concerns were not addressed.

• Many of the building materials are original to the 1970s and hold years of smoke, dirt, stains and decay — including dead mice and mouse droppings that have fallen onto work spaces from the ceiling.

County Treasurer Hope Anderson, who was appointed in October, spoke to the board Tuesday. She said that for her, the biggest issue in the building was security, but that all the issues discussed were important and needed to be addressed.

“We are talking about the basic needs for our employees,” she said.

“I think we have been here so long that we get used to it,” she said. “But I think having a new elected official come in and say, ‘this is not ok,’ reenergized us to say, ‘we have complained for years. We are tired of complaining.’ … We would like to see some action taken. We are continually told, ‘wait, wait, wait, we are going to do something,’ but it is past time.”

Both Anderson and McMichael said that annex employees were frustrated by the situation. In the letter given to commissioners, leadership within the annex came up with a list of recommendations for the board of commissioners to take regarding the situation.

• The annex workforce be moved to a healthier and safer office space within the next 18 months to 3 years, preferably a new building on the Law and Court campus.

• The board retain an appropriate consultant to conduct a comprehensive facilities assessment creating a prioritized plan and schedule with cost ranges to assist the board in the allocation of county resources to address significant facility issues, upgrades and replacements.

• The board obtain a vendor to do a deep clean of the annex facility, followed by daily “A” grade level cleanings. The annex is currently cleaned at a “C” level.

Commissioner reactions to the letter were mixed.

Commissioner Skip Dyes agreed that there are cleanliness issues in the annex and that changes needed to be made regardless of whether or not the employees would be moved to a new location soon.

“Even if they move in a year, for that year [employees] need to feel special,” Dyes said. “They need to feel appreciated so that they can do better work. It is all about morale.”

Commissioner Michael Grice said he took issue with the letter, calling it a “mutiny.” He reminded annex employees that the board is currently working on implementing new security measures in the building and said that there were things the employees could do themselves to increase security, such as keeping their doors locked.

“You can’t challenge the board by these demands,” he said. “You have got to work with us. That’s all I’m asking.”

Despite this, annex employees said they felt their requests were reasonable and that they would continue to ask for them.

“I don’t think these demands are mutiny,” McMichael said. “I think it is us respectfully asking for consideration. We are just asking for some sort of movement.”

• The board of commissioners addressed the county’s 1897 historic courthouse for the first time since its Nov. 1 meeting, where commissioners voted down two resolutions: one to retain ownership of the courthouse for the purpose of restoring it and another to sell or otherwise transfer ownership or lease the courthouse to the Cass County Economic Development Corporation or a nonprofit started by the EDC. With both resolutions voted down, the county currently retains ownership of the building, but is no closer to formulating a long-term plan for it.

“I’m embarrassed, disappointed, confused in the last meeting,” said Chairman of the Cass County Board of Commissioners Terry Ausra. “I thought we were ready to do something.”

Ausra asked his fellow commissioners to provide input into why both resolutions were voted down and what needed to done to have a decision on the courthouse passed.

Commissioner Robert Ziliak suggested that part of the problem comes from commissioners being unwilling to negotiate and compromise.

“I don’t think any decision is going to be made ever, because I don’t see anyone being flexible,” Ziliak said.

Due to a lack of time, the board did not fully discuss the issue of the courthouse, but agreed more discussion was necessary on the topic.