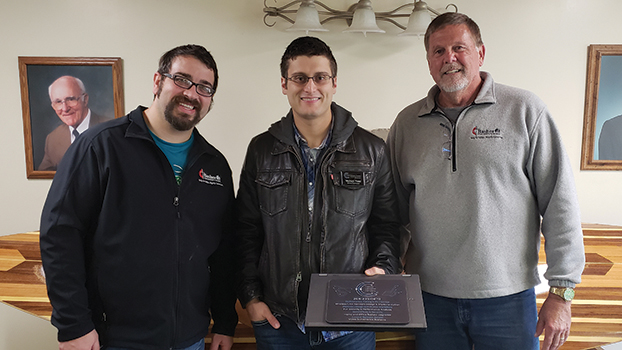 NILES — Instead of re-selling some used computers, a Niles business decided to give the technology to children in need.

On Friday, Custom Computer Company gave away six laptops to the Bashor Children’s Home in Elkhart. The nonprofit, child welfare agency provides residential care for troubled children and their families. Bashor officials had been looking for donations to update a computer lab for children to use.

Michael Reed, Custom Computer Company business owner, heard through a friend that works for the Bashor organization that they were looking for computers. Reed said he had intended to give several computers to Bashor earlier this year, but historic flooding in February destroyed the computers and much of Reed’s inventory.

Nonetheless, Reed said the flood was part of his inspiration to give back.

“After the flood, with all that was donated to us, it is hard not to want to give back to somebody,” Reed said. “Honor Credit Union pretty much built our entire computer lab after the flood, because they wanted to.”

After Reed completed a technology upgrade for St. Mary’s school in Niles, the school requested that Reed find a way to recycle the computers. While he said he could have refurbished and sold the computers, he knew they would be a good fit at Bashor.

“They were better than the ones we had originally set up [for Bashor],” Reed said. “Instead of having a whole set up, now they are getting laptops. They are newer Dell laptops, with Custom Computer Company mouse pads and wired mice for the kids.”

Reed said they are willing to donate four more computers as the lab grows.

In addition to donating the computers, Custom Computer Company also spent time setting the computers up and equipping them with anti-virus software. Reed said he hopes the technology will provide a way for the children to have easier access to school materials and some free time with the computers.

“I think the kids will be a lot happier than using what they were trying to use before: ancient computers that they could not do anything on,” Reed said. “A lot of these classroom tools online, they could not use those before.”

Since opening a storefront for Custom Computer Company in 2017, giving back to the Michiana community has been one of the business’ efforts in addition to servicing customers in need of technology repairs. The business, located at 603 N. Second St., serves as a free computer lab to youth and hosts a number of community of events. While Reed said they cannot give to everyone in need, they have donated equipment to local churches and offer discounts to nonprofits.

“I like being presented with opportunities to help when it is not demanded,” Reed said.