Dowagiac VFW members reflect on what Veterans Day means to them 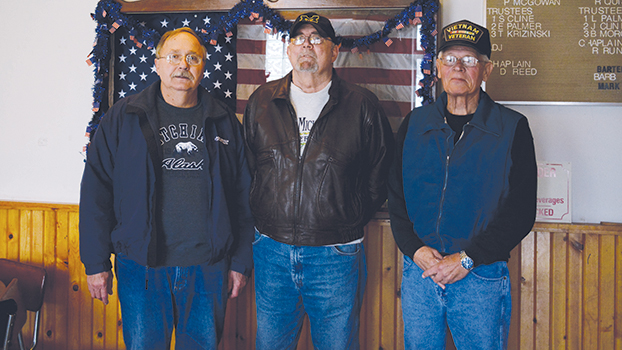 DOWAGIAC — Inside the Dowagiac Veterans of Foreign Wars post is a bar, resting on dozens upon dozens of glass blocks. Though time has faded several of the blocks, if one were to look closely, they would see a name in nearly every one of them — the name of a veteran.

“What happened is that when [the bar] was being built, everyone bought a block and had their name put on it,” said VFW Post 1855 Commander Bill Bobik. “As you can see, there have been a lot of veterans here, and it was a close community.”

Sunday was Veterans Day in the United States — and, an even bigger milestone, the 100th anniversary of Armistice Day — a national holiday to honor those who have served in the U.S. Armed Forces. Prior to the holiday, Bobik, along with VFW members Tony Krizinski and Stuart Cline, sat down inside the Dowagiac VFW hall to discuss what Veterans Day meant to them and how it honors veterans — including every name etched onto the glass blocks in the building.

To the three veterans, Dowagiac is a special place they said they are proud of. It is a place that raised them, welcomed them and always treated them with respect.

Bobik, Cline and Krizinski, all of whom are Vietnam War veterans, were raised in Dowagiac, and while many Vietnam veterans have stories of being mistreated when coming home from the war, these three do not — which they credit to the community around them.

“I never had a problem,” Krizinksi said, as Cline and Bobik nodded in agreement. “I’m from this little town. I came home and was never mistreated.”

“When I came home, I was treated with respect,” Bobik added.

Though the three Dowagiac veterans could not pinpoint what made Dowagiac more welcoming, they had many theories ranging from the fact that, at the time, the city had a high number of World War II and Korean War veterans. Bobik had a simpler theory — that Dowagiac is a tightknit community that looked out for its veterans.

“We were really a close group of people,” he said. “It was just something special.”

While Bobik said the people of Dowagiac have always tended to respect veterans — just last week he had someone thank him for his service as he was in line to vote — he said he hopes that people from all over took time Sunday to thank their local veterans.

“I think Veterans Day to me is a very important day,” Bobik said. “There are a lot of very important thoughts and memories on that day of things that have happened in the past. … I’m glad they have singled out a day to honor all veterans in the service, not just the ones who have been in war, but all who have put their time in the military, be it stateside service or wherever. I’m glad we have a day for them.”

Though the three veterans said they would never ask for nor demand respect, they feel that Veterans Day should be observed to honor veterans who have sacrificed for the safety of the country.

“People should think of the sacrifices made and the freedoms they have on Veterans Day,” Cline said.