SOUTHWEST MICHIGAN — There was a lot at stake this election, from the potential legalization of recreational marijuana in Michigan to Democrats and Republicans vying to fill vacant seats in the house and senate. Across the U.S., President Donald Trump rallied Republicans to get to the polls, while former president Barack Obama sought to motivate Democrats to create a “blue wave.”

Whatever the reason, in southwest Michigan county clerks reported seeing higher voter turnouts than in past years.

Jane Wilson, a clerk for the city of Dowagiac, was expecting a high voter turnout Tuesday night during the midterm election. Still, the anticipated lines of voters eager to cast their ballots at local precincts across the city moved her to feel a sense of excitement that has been an inevitable force in this year’s midterm election.

Wilson said she was happy to be part of the historic moments that marked this year’s results.

“I am feeling very grateful,” she said. “People were very patient, accommodating. It was an experience that I’m fortunate to be part of.”

While Wilson said she does not have official figures, she estimated that the city saw a 38 percent voter turnout, a relatively higher number of voters compared to prior midterm elections.

“We were very prepared,” Wilson said. “I hired a lot of new election workers so that we were able to minimize the amount of time that people waited in line.”

The call for residents to support local issues was among the motivating factors for Dowagiac residents to get to the polls, Wilson said.

She believed one of the most important issues was the millage to support large-scale improvements to the Dowagiac District Library, which was passed.

The outcome in Dowagiac was consistent with a number of precincts in Berrien and Cass counties, which saw an outpouring of voters in comparison to prior midterms. In Berrien County, out of 125,395 registered voters, 63,213 turned out to the polls – a 50.4 percent turnout, according to electionreporting.com. Cass County saw 20,346 voters out of 40,605 registered voters – a 50.1 percent turnout.

In Niles Township, Terry Eull, a clerk for the past six years, said this year’s midterm had an energy he has not seen in many elections.

“It was a very, very good turnout,” Eull said. “We were busy almost all day.”

Eull approximates that about 5,000 voters turned out to the township’s five precincts. In contrast, he said the last presidential election in 2016 saw about 6,000 voters.

Like Dowagiac, Eull said the township anticipated a large turnout. He said poll workers were well prepared to help voters get through the polls as quickly and efficiently as possible. He estimated that most voters were able to get through the polls in about 15 to 20 minutes, with only some very minor issues, including running out of ballots in one precinct due to being shorted on a paper supply that was remedied quickly.

Eull said he noticed more younger voters at the polls this election.

“There was a lot of young people, which was good to see in the precincts,” Eull said. “[And] a lot of younger people voting for the first time, so that was cool.”

As to why this year’s midterm saw more of a turnout, Eull said election publicity likely contributed, as well as the issues that were on this year’s ballot, including the proposal to legalize recreational marijuana and a big interest in a number of candidates, including the race between Democrat Matt Longjohn and incumbent Fred Upton, both seeking to be a U.S. representative in Michigan’s 6th Congressional District. Upton claimed the victory, earning 50.2 percent of the votes, according to the Associated Press.

In the city of Niles, Linda Casperson, the clerk, also saw a greater than normal turnout. She approximated that 37 percent of registered voters participated in the election. Comparatively, she said 2014 saw a 23 percent voter turnout.

Casperson said she believed local races for city council helped to increase voter turnout. In the end 4th Ward incumbent Tim Skalla was defeated by Jessica Nelson. In the 2nd Ward, incumbent Bob Durm and Travis Timm tied and it is yet to be determined who claimed the victory.

Casperson also said there were local Niles residents participating to represent their constituents at the state level, including Niles New Tech teacher Brad Paquette, who faced off against Democratic challenger Dean Hill, also a Niles resident. In the end Paquette claimed a victory.

In an earlier interview, Hill remarked that President Donald Trump was among the reasons voters flocked to the polls Tuesday. He said whether a Republican or Democrat, many were eager to give their party a voice on a number of divisive issues.

No matter what their reason, Wilson said she was happy to see more residents called to fulfill their civic duty and she recognized the work of those stationed at the polls for helping things to run smoothly.

“The most gratifying thing was to have so many committed poll workers,” she said. 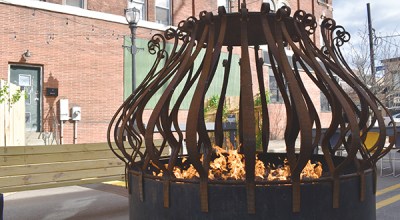