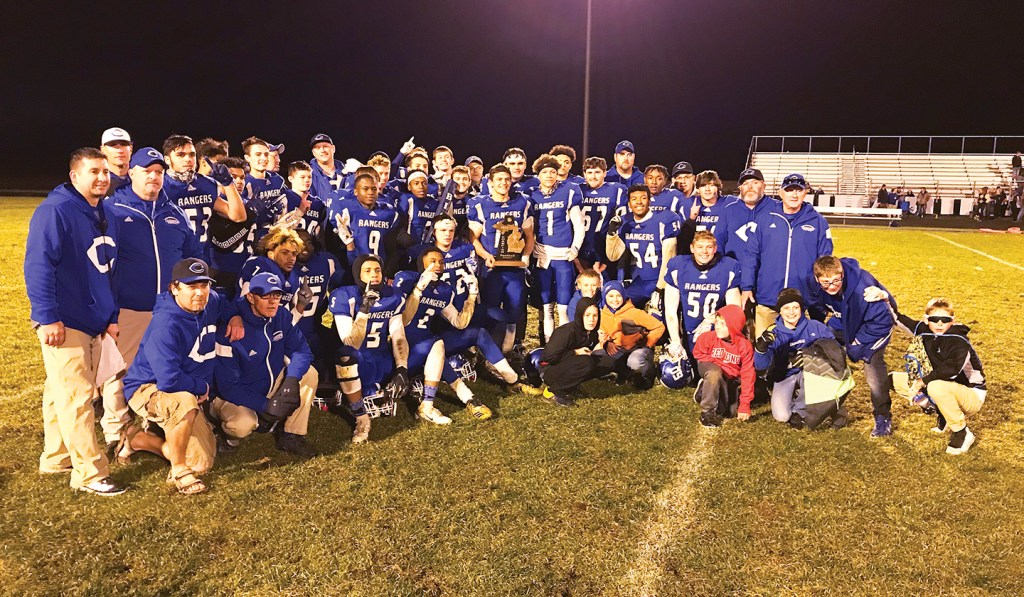 CASSOPOLIS — For the fourth straight year, Cassopolis advanced to the regional round of the MHSAA state football playoffs.

The Rangers picked up their fourth consecutive district championship with a 35-0 win over visiting Centreville in Division 7 play at William F. Scott Field Friday night.

While Cassopolis is no stranger to regular and postseason success, the 2018 football team became the first Ranger squad to win its first 11 games.

Cassopolis (11-0) will host Monroe St. Mary Catholic Central in the regional title game this weekend. A day and time have yet to be released for the game.

Friday night, the Rangers rode the legs of Tyrese Hunt-Thompson to victory over the Bulldogs.

Hunt-Thompson scored four touchdowns and ran for 103 yards on 16 carries as Cassopolis defeated Centreville for the second time in three weeks.

The Rangers captured the Southwest 10 Conference championship with a 21-0 win over the Bulldogs in the regular season finale.

While much is made of the Cassopolis offense and Hunt-Thompson, it was the Rangers’ defense that helped set the tone for Friday night’s championship, and for the entire season.

Cassopolis has allowed just 30 points this year and has now pitched seven shutouts.

“We came out in the same defense we did a couple weeks ago, and then we made adjustments after about a series and a half,” said Cassopolis coach Dan Purlee. “We knew they (Centreville) would try different things after the last time, so we had a couple other options for them defensively. Those worked tonight.”

The Ranger defense limited the Bulldogs to just 147 yards of total offense, of which 144 came on the ground.

Ahsan Hart led the defensive charge with 13 tackles and a fumble recovery.

Gage Collins had 12 stops, while Hunter Parsons, Dylan Green and Skylar McKee all finished with 10 tackles.

On the other side of the ball, Cassopolis rolled up 258 yards of total offense on a field that was wet and soggy from Thursday night’s rain.

J.J. Hart added 83 yards and a touchdown on seven carries, while Owen Gardner carried the ball nine times for 44 yards.

“This never gets old,” Purlee said. “We have pretty high expectations for these guys. They stepped up tonight.”