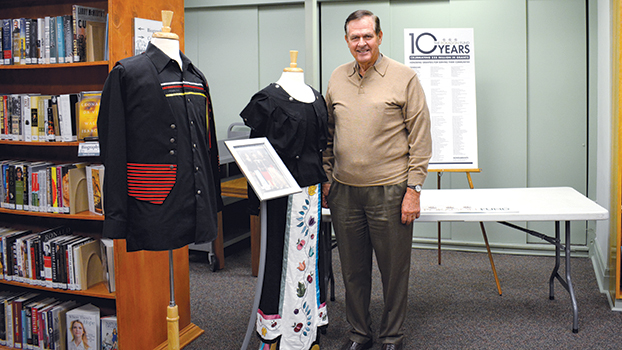 DOWAGIAC — Visitors to the Dowagiac District Library this month will be able to step into and learn more about the history of a local organization.

The Pokagon Fund has placed a display in the Dowagiac District Library in celebration of the organization’s 10th anniversary. The display showcases historical documents, honors former Pokagon Band elder and leader Henry White, who was instrumental in the creation of the fund, traces the steps leading to the creation of The Pokagon Fund and displays traditional Pokagon wedding garb.

The Pokagon Fund is a nonprofit, private foundation supported by revenue from The Four Winds Casino Resort in New Buffalo, Michigan, which uses funds to support Michiana communities in the areas of education, poverty reduction and community vitality, according to its website. Now celebrating its 10th anniversary, the Pokagon Fund has granted more than $25 million in awards and scholarships. In Dowagiac, grantees have received more than $1 million dollars over the last 10 years from the Pokagon Fund. Among the several Dowagiac grantees to have received funds from the Pokagon Fund are ACTION Ministries and the Dowagiac Housing Commission.

“Really what we are celebrating, in addition to the 10th anniversary, is the generosity of the Pokagon Band,” Krsul said. “This was a totally voluntary gift to the communities that are in the area of the casino.”

To celebrate the Pokagon Band, the Pokagon Fund display has been featuring Pokagon art. At the Dowagiac District Library, that art is represented through hand-made traditional wedding clothes that were once worn by members of the Pokagon Band.

“The Pokagon Band has some marvelous artists, and art has always been a part of the culture,” Krsul said. “They have done magnificent work when it comes to baskets, pottery, painting, beading and, of course, the clothes that are worn.”

Krsul said he hopes those who see the display will learn more about the Pokagon Fund, the Pokagon Band of Potawatomi Indians and what Pokagon Fund grantees have done in the community.

“This celebration is just meant to focus on the Pokagon Fund, but our grantees and the communities they serve,” he said.

SOUTH BEND — This time of year, it can seem like the leaves are never going to stop falling. While... read more