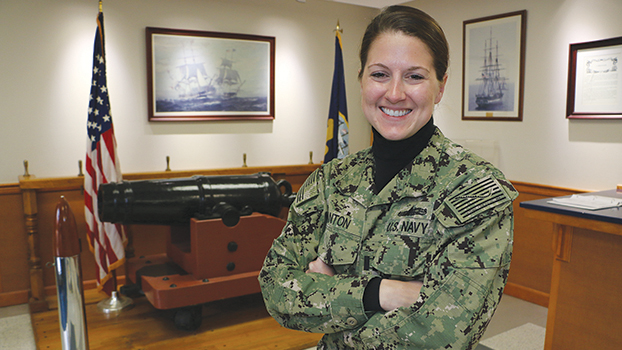 Lt. Caroline Stanton, formerly of Dowagiac, is now one of the most elite surface warriors. (Submitted photo)

NEWPORT, RHODE ISLAND — Lt. Caroline Stanton applied the lessons she learned from Dowagiac to become what the U.S. Navy calls one of the most elite surface warriors.

“What I learned from my hometown is to get to know others while serving people,” Stanton, a Dowagiac native, said. “Being in a small town everything is very personal, and I’ve carried that personal relationship mindset into my time in the military.”

Those lessons turned into an opportunity to learn leadership and the most innovative tactics of surface warfare at Surface Warfare Officers School, located in Newport, Rhode Island.

“I chose to continue serving as a surface warfare for the sailors,” Stanton said. “I want to be the best leader I can be for them.”

Once service members finish training, they are deployed around the world putting their skill set to work aboard Navy ships, such as aircraft carriers, cruisers, destroyers, amphibious warfare ships, mine warfare ships and littoral combat ships.

Stanton is a 2006 graduate of Dowagiac Union High School and a 2010 graduate of Bob Jones University.

There are many sacrifices and goals one must achieve to be selected as a surface warfare officer and Stanton is most proud of navigating USS New York on two successful deployments halfway around the world and back, said representatives with the Navy Office of Community Outreach.

“It was a privilege to serve aboard USS New York, where we did important work for the nation,” Stanton said. “I was humbled to be part of their success in completing every mission. We did what we were asked to do, and we all made it home safely.”

The future of surface warfare is rapidly changing, so the course and materials at Surface Warfare Officer School are constantly evolving to create the most dynamic, lethal, safe and professional warfighting team for the Navy the nation needs, according to the Navy Office of Community Outreach.

“It is critical that students report to the fleet with the academic baseline required to perform as warfighters in today’s maritime environment,” said Lt. Matt Gallagher, the command’s public affairs officer. “SWOS training is at the epicenter of professional development for surface warfare officers throughout their careers.”

Surface warfare has been a part of world history for more than 3,000 years, and the United States has its stamp on that history with actions ranging from the American Revolution to modern day operations at sea around the world.

Stanton is continuing a family tradition of military service.

“I have three uncles who all served in the military,” she said.

As Stanton and other surface warriors continue to train, they take pride serving their country in the U.S. Navy.

“Serving in the Navy means service and teamwork,” Stanton said. “What I love about serving in the military is that we take people from all different backgrounds to support one common goal.”