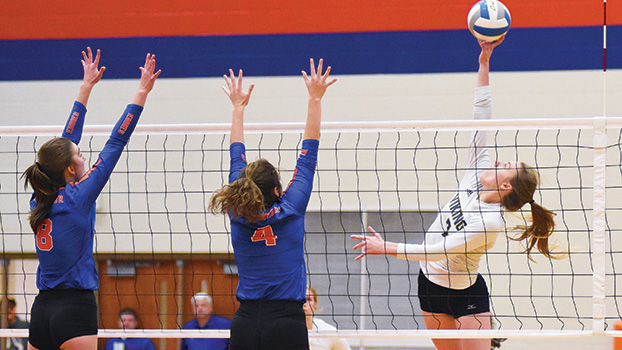 EDWARDSBURG — A year of ups and downs for the Niles volleyball team came to an end at the Division 2 district tournament in Edwardsburg on Saturday.

The Vikings, who along with the Eddies, claimed Class B district championships last year, were on a collision course this year as the MHSAA switched to divisions and pitted the two schools against east other in the same district.

The Eddies will face the Trojans at 7 p.m. in the second semifinal on Tuesday.

Hamilton, whom the Vikings defeated in the regional semifinals last year, will face Lakeshore in the first semifinal at 5:30 p.m.

Niles reached the championship match by defeating Three Rivers and then holding off upset minded Dowagiac in the semifinals on Thursday night.

Despite the loss, Niles coach Jenny Nate knows her team gave everything it had all season and was proud of the way they battled Edwardsburg on its own court.

“I told them ‘you walk out of here with your heads held high. You did everything I asked of you,’” she said.

One of the differences in Saturday’s match was experience.

The Eddies have five seniors compared to just two for the Vikings.

Last year when Niles defeated Edwardsburg for the regional championship, the roles were reversed with Niles having six seniors, all of which went on to play college volleyball.

“Experience was a big thing,” Strefling said. “I definitely think it did help us today. Having five seniors helps. Last year (the loss to Niles) was fresh in their minds.”

After being dominated by the Eddies in the opening set, Niles relaxed according to Nate and played their game the rest of the way.

“They remembered what they were here to do,” she said. “They prepared hard for this. They were ready. I told them to play with heart and with energy.”

One of the key reasons Niles made it back to the district championship was the playing of senior Abbie Harpenau.

Harpenau turned in an outstanding performance throughout the district tournament.

In the finals against Edwardsburg, she finished with seven kills, three blocks, three points, seven digs and an ace.

Edwardsburg was led by junior Jocelyn Hack, who had 11 kills, six digs and four blocks.

Senior Skye Leach finished with eight kills, 19 digs and two assists, while senior Anna Hull had 10 kills and a block.