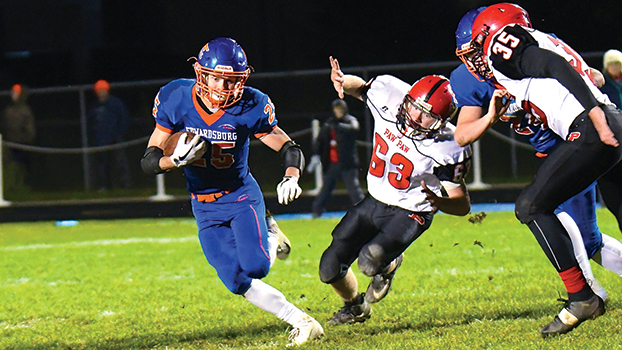 EDWARDSBURG — For the eleventh straight time this season, the Edwardsburg Eddies faced a Wolverine Conference foe under the Friday night lights.

And just like the previous 10 games, the Eddies used their high-powered Wing-T offense on visiting Paw Paw and crushing them 49-10 to win their third consecutive Division 4 district championship and their fourth in the last five years.

But the game ball didn’t go to the Eddies’ offense, but rather the defense, anchored by Chase Sager, Cameron Thompson, and Dillon Hursh.

Those three Eddies consistently found their way in the Paw Paw backfield, disrupting pass plays while amassing 11 tackles for loss on the night. Not to mention a couple of fumble recoveries by Sager and Logan McColley, and an interception by Bryce Blue.

“They couldn’t go inside, they couldn’t go outside and any time they dropped back, most of the time it was Sager grabbing the guy 10 yards back,” said Edwardsburg Coach Kevin Bartz. “Our defense all year has been outstanding. Even tonight, it stood out more than anything. Other than the kickoff return, the penalty and the last pass, they couldn’t do anything.”

The last pass Bartz referred to was Paw Paw’s final play from scrimmage when Mason Popp found Peter Frey on a 44-yard touchdown pass with just over a minute remaining in the game. That play would put Paw Paw in plus yardage, finishing with 30 total offensive yards on the night.

Even though it was a blowout at the end, the beginning of the game was anything but.

The Paw Paw defense, looking to build off a stellar display of limiting Three Rivers to just seven points in last week’s 14-7 upset win, held the Eddies to consecutive turnover on downs in the opening quarter.

Gaideski would get another conversion after quarterback Tre Harvey made his way to the end zone on a six-yard run.

Isaiah Mitchell also scored on a five-yard run in the second quarter.

Paw Paw freshman kicker Jose Valverde kicked a 26 yard field goal just before halftime to put the visitors on the board.

Two straight Paw Paw turnovers in the third quarter led to Edwardsburg points and all of the sudden the game was broken open.

Sager added his name to the scoresheet with a 21-yard rush as well at the end of the third quarter. He finished with 11 rushes for 90 yards and a touchdown.

Goggins tallied his second score of the game on a 16-yard run in the fourth quarter while the mercy rule running clock was implemented to solidify victory. He would finish with 11 rushes for 139 yards and two touchdowns.

Mitchell had eight carries for 62 yards and a pair of scores, Harvey ran for 49 yards on five attempts and two touchdowns, while Gaideski finished with six carries for42 yards.

Edwardsburg will look to win its third straight regional championship as it hosts Holland Christian, a22-19 winners over Grand Rapids South Christian, at 7 p.m. on Saturday.