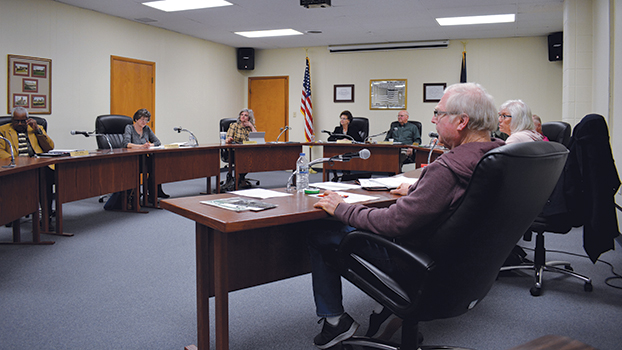 The Cass County Board of Commissioners voted down two resolutions that could have decided the fate of the historic county courthouse Thursday. For the time being, the county will retain ownership of the building. (Leader photo/SARAH CULTON)

CASSOPOLIS — The fate of Cass County’s historic courthouse is again in limbo following a vote by county commissioners Thursday.

According to Cass County Administrator Karen Folks, Thursday’s vote was to set a course of action to deal with the county landmark, which has been discussed for more than a decade, with commissioners beginning to involve residents in discussions around five years ago. The issue was last discussed at a work study meeting on Oct. 2, during which the commissioners decided to vote on the two resolutions during Thursday’s meeting.

However, both resolutions were voted down Thursday, meaning that the county will retain ownership of the building and the commission is no closer to determining a long-term plan for the courthouse.

The resolution for the county to retain ownership and restore the building was voted down 4-3, with Commissioners Ann File, Terry Ausra and Skip Dyes voting yes, and Commissioners Michael Grice, Clark Cobb, Roseann Marchetti and Robert Ziliak voting no.

The resolution to transfer ownership of the courthouse to the EDC, for the purpose of the EDC raising money through donations to restore the courthouse, was voted down 5-2, with Commissioners Cobb and Ziliak voting yes, and Commissioners Ausra, Marchetti, Dyes, File and Grice voting no.

The decision to vote down both resolutions sparked outrage among residents in the audience Thursday, many of whom were members of Friends of the Courthouse, a local citizen group that has been advocating for the EDC to restore the courthouse into a community space. Prior to the vote, several members gave impassioned speeches to the board, asking commissioners to vote to transfer ownership to the EDC.

“We have always said that the courthouse belongs to the people, and we need to pay for the renovation,” said member Cathy LaPointe, whose message was echoed by several others. “Current and former citizens of Cass County love our courthouse and will ensure it becomes a multipurpose center of community activity. … We want a vibrant building used by all of us. A vote to sell will ensure that happens.”

After the vote, members of the group said they were frustrated and disappointed that there was no movement whatsoever on the courthouse.

“I’m just so disappointed that nothing has happened,” said Friends of the Courthouse representative Zane Lankford. “We are just in another state of limbo.”

“[The board] let us down,” added Zane’s husband Stacy Lankford. “They let us down as our elected officials.”

Chairman of the Cass County Board of Commissioners Ausra said he did not know why both resolutions failed Thursday, but that he would be polling board members to find out why they voted the resolutions down and find out what needs to be done for the board to come to a decision about the courthouse.

“I didn’t expect this. I thought that this would go one way or another, but we are back where we were,” he said. “But we are going to find out what it takes [for a resolution to be passed] and get it done. This has been sitting too long. … I think we need some fresh ideas, because clearly these ideas were not acceptable [to the board]. We can’t just [vote on the same resolutions] again.”

Until then, Cass County residents said they don’t know how much longer they are willing to wait for the fate of the courthouse to be decided.