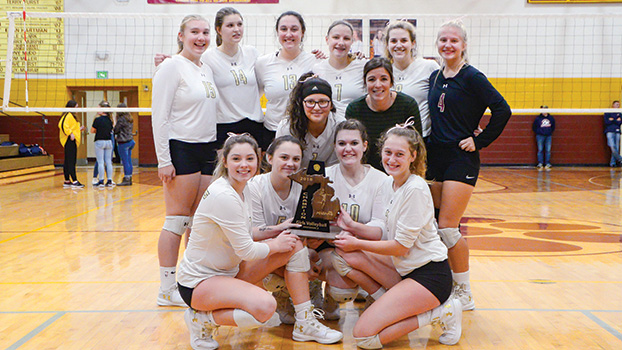 NILES — If one wants to know what true strength is, they need to look no further than the Brandywine volleyball team.

The Bobcats were crowned district champions for the second year in a row Thursday evening, defeating Bridgman 25-11, 25-13 and 25-17 for the Division 3 title.

The win was well deserved for a team that has faced more obstacles than it bargained for this year.

Injuries benched some of Brandywine’s top players throughout the season, and in the weeks leading up to district play, the team lost its head coach. At times, the players were coaching themselves and relying on co-coaches to get them by.

Despite the challenges, the Lady Cats never lost sight of their goals and have turned a few negative situations into positives, creating a new motto along the way – “why not us?”

“We’ve been through so much already that at this point, why not us?” said interim coach Sarah Dye. “We have no choice but to keep working on us. One thing I love about this team is that they never changed their attitude. They keep pushing forward no matter what each day brings.”

Dye, the former Brandywine eighth grade volleyball coach, officially took over as varsity coach on Oct. 18. Her plan is to continue to build team bonding and stay focused on the team’s strengths and most importantly, themselves.

So far, her plan is working.

Against the Bees, a total team effort was present, even with players still recovering from injuries.

Megan Schmidt was back in action for the Bobcats, ending the night with 18 digs. Schmidt was out in previous games due to an elbow injury. Setter Audrey Longley, also recovering from a back injury, was almost perfect at the net, assisting in Bethany Duval’s 16 kills on the night.

“When our front row is on, they’re on,” Dye said. “That is one of our strongest areas. I am very happy with the performance of Audrey, Bethany and Kylie at the net.”

Longley is one of three Brandywine seniors who played their last home game Thursday.

“This is such a great ending to us leaving this gym,” she said. “I have so many memories on this court that will stay with me forever and tonight is the best one. We pushed through everything we could. I hope we don’t have to face any more adversity, but if we do, we will fight through it like we always do.”

Olivia Thomas, another senior, teared up after being asked about her last home game.

“It hasn’t even set in yet,” she said. “It’s so surreal that this was my last night playing here, but it’s a night I won’t forget. Tonight, we wanted to prove a point that no matter what you face as a team, you come out stronger.”

Brandywine, now 45-5, will open regional play on Tuesday at Bronson, where they face No. 3-ranked Schoolcraft at 7 p.m.

Dye admitted it’s going to be a tough regional.

“We can only control our destiny at this time,” she said. “We have to stay aggressive, and we have to go to where our strengths are. We have a tough team to play next week, but we are just as tough. Why not us to move on to the next round?”

The first semifinal will pit Centreville against host Bronson, which is the defending Class C state champion.

The Division 3 quarterfinal will be hosted by Hudsonville Unity Christian at 7 p.m. on Nov. 13.