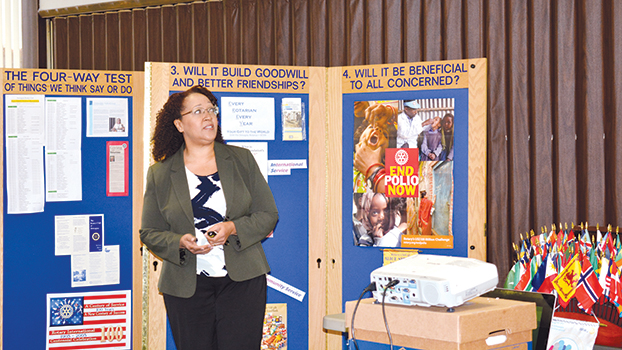 DOWAGIAC — A group of Dowagiac residents and workers partook in a presentation Thursday to help them become more informed voters.

St. Joseph-based attorney Gwendolyn Powell Braswell visited the Dowagiac Rotary Club Thursday to provide the club with information about Michigan ballot proposals 2 and 3 prior to next Tuesday’s midterm elections. Braswell has experience with voting laws, having worked in Washington D.C. with cases on voting laws, before moving to Florida to work in appellate law. She now works in estate law in St. Joseph.

The presentation was requested by members of the Rotary Club.

“Thank you for having me. I’m so happy to be here talking to you about voting,” Braswell said Thursday. “My father was an immigrant, and he came here from Jamaica. Being an immigrant, he studied the law and became a naturalized citizen. He always impressed upon us kids to take our civic duties very seriously.”

“Gerrymandering is not a partisan issue. Both parties take part in this,” Braswell said. “In Michigan, you have a similar number of Republicans and Democrats, but because of all the packing and cracking that goes on, you have more of one party in [the legislative districts] that represent them.”

Braswell told the Rotary Club that she hoped the information she gave them was helpful and would inspire them to vote informed on Nov. 6.

“Voting has always been something very treasured to me. Even on my 18th birthday, my main goal was to get registered to vote,” she said. “I hope I was able to help make some of these issues clearer.”