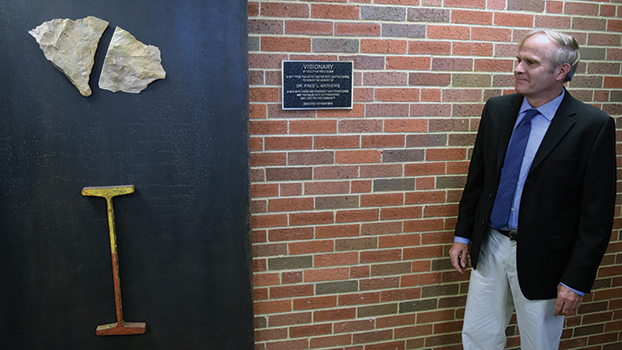 A sculpture was recently dedicated to SMC’s Fred L. Mathews Library. Pictured is Fritz Olsen, maker of the piece, looking at the sculpture. (Submitted photo)

Dedicated Oct. 25, the plate honors the library’s namesake, who chaired the SMC Board of Trustees for half a century before his March 19, 2017, death at 87. The plaque memorializes “a man with vision and foresight who persevered and prevailed with determination and love for his community.”

“Martha and I are just impressed with this family’s character, how they’ve lived their lives and what they mean to the community,” Olsen said. “When we heard of Fred’s passing, we were saddened. This piece, compared to my body of work, is very abstract, but seemed to resonate something basic that we as human beings can relate to nature, work together and be inspired to find a common goal and make a change to make something out of nothing for everyone. This piece of steel and stone is the largest from a series of wall pieces I’ve worked on for about a decade. To me, it represents man’s inspiration to change something in the dimensional world.”

“Fifty-four years ago, leading up to the November 1964 election,” said SMC President Dr. David Mathews. “it was very uncertain whether this was going to remain a cornfield or there was going to be a college. Voters levied a tax on themselves by more than two-to-one so they could have a college for their children.

“My father’s vision from the very beginning was that this be much more than access to vocational education. Of course, we offer auto mechanics, welding, construction and robotics, but he thought that to be a ‘real college,’ it had to be physically laid out like one and with a firm commitment to the arts, whether instrumental music, choral music or fine arts — which is remarkable because he was neither artistic or musical himself,” Mathews said.

“My mother was the prime mover in bringing public art to Dowagiac,” Mathews continued. “There are 15 public sculptures in the city. It’s said that per-capita, that’s more than anywhere in America.”

Olsen knows Thelda Mathews from when she chaired the Dogwood Fine Arts Festival’s Visual Arts Committee during more than a decade as it amassed the collection praised by Virginia Mecklenburg, senior curator for the Smithsonian American Art Museum, while attending the 2002 Stone Lion dedication.

Dowagiac residents are especially familiar with Olsen’s swiveling white Vermont marble Sunflower dedicated May 15, 2006, in Beckwith Park as the Grand Old City’s sixth sculpture, a gift from the Brosnan family.

The 78-pound Visionary features two chunks of Siena marble and an I-beam on oxidized sheet metal 75 ¼-inches tall and 22 ½ inches wide. Siena is a city in central Italy’s Tuscany region. Olsen believes the two-toned girder section came from “when Chicago redid the Dan Ryan Expressway in the late ’80s.”

Cares, a soprano, appeared in more than a thousand performances with the National Broadway Tour of “Phantom of the Opera.” She is also a visual artist known for brightly-colored rescue dogs, and began participating in Grand Rapids’ ArtPrize in 2012.