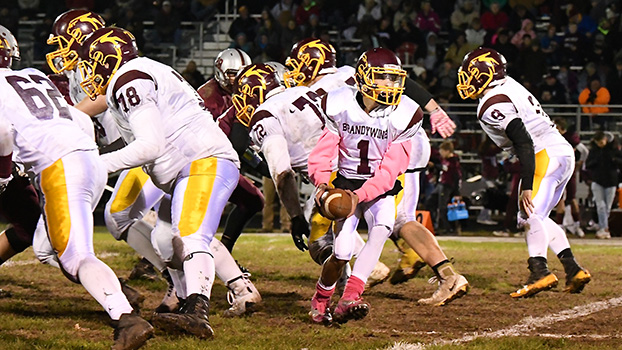 NILES — Of the four runners who qualified for the MHSAA boys cross country state finals at Michigan International Speedway on Saturday, only Brandywine senior Bryce McLane had to compete the night before.

The Bobcat senior quarterback went 12-of-18 for 213 yards and threw five touchdowns in an 86-50 loss to the Panthers, who ended Brandywine’s season.

Needless to say, his mental focus was not 100 percent when he arrived at Centreville for the Division 3 regional that morning.

But McClane was not to be denied in his final attempt at qualifying for the state finals. He pulled himself together, tried to shake off the disappointment from the previous night, and get the job done.

That he did as McClane finished ninth overall with a time of 17:40.70 to earn a spot in the Division 3 championship race, which begins at 10:10 a.m. at Michigan International Speedway in Brooklyn.

“It is tiring, but it helps me to keep in shape because I do quite a few sports,” McClane said. “After a win on Friday night it always helps me run on Saturdays because I feel good. But after our playoff game, regionals was a little bit difficult, but I just tried my best to qualify for state.”

In the state finals, more than any other race on the schedule, runners need to develop a strategy due to the amount of runners in the event.

Because he does not practice cross country, McClane said he and coach Terry Borr have not really discussed a strategy for Saturday.

“I pretty much just go out there, run and compete,” he said. “If I see somebody I think I can catch, I try to go out and get them.”

Borr has been impressed with McClane’s accomplishments despite the lack of training.

“Last week he went out there and did what he had to do to qualify,” he said. “He had a rough night the night before emotionally, but he was able to come in with a good frame of mind. If he had concentrated on cross country, I think he would have a great shot at being an all-state runner.”

Across town, another multi-sport athlete will also be trying to earn all-state honors.

“Technically, he has been training about two weeks,” said Niles coach Tony Todd. “He built a good base over the summer, but he has been playing soccer and running with us when he can. So, when his soccer season ended, I got him, we trained hard and he chopped 30 seconds off of his time.”

Todd believes Shepherd could post another personal best at the state finals. He also knows that to have a shot at all-state, he is going to have to shave perhaps another 30 seconds off his time.

“Regionals are so crowded,” Todd said. “You have to get out fast if you want to do anything and most kids are not used to having to do that. It hurts a lot of kids because they have to sprint away from the start. We actually practice that.”

Niles’ Kaylee Thompson will be making her second consecutive trip to the state finals.

She finished fourth overall at the Centreville regional with a time of 19:40.

“We are hoping that Kaylee makes it into the top 30, which is all-state status,” said coach Jami Foster. “Last year she went in ranked 78th and ended in about 48th place. That tells us that anything is possible.”

Foster and Thompson have talked about finishing in the top 30 this year.

“We hope she achieves this goal, but even if she doesn’t, she has had a remarkable season with lots of season and career personal records,” Foster said.