Yarn on Front to partake in nationwide event 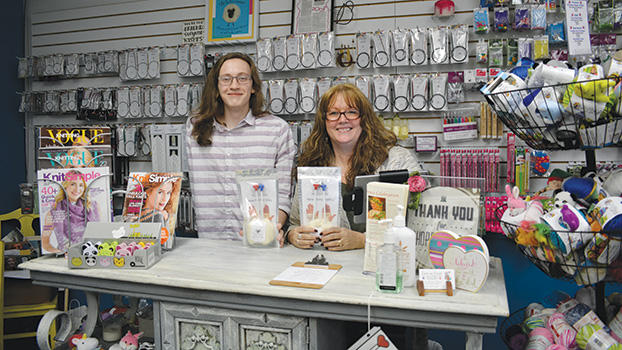 Yarn on Front employee David Hollister and owner June Nemeth pose for a photo. The store will be participating in 10,000 new knitters on Nov. 10. (Leader photo/SARAH CULTON)

DOWAGIAC — Yarn on Front owner June Nemeth has loved knitting since she was 16 years old and has created a business to share her love of the craft with others. Now, she is participating in a nationwide event to bring even more people into the world of knitting.

On Nov. 10, Yarn on Front, 122 S. Front St., Dowagiac, will participate in 10,000 New Knitters, a nationwide event sponsored by Skacel, a company that sells yarn, needles and other crafting supplies. For the event, the company sent 10,000 beginner knitting kits to yarn and crafting shops across the country to bring in new knitters to the hobby. The kits come with a ball of yarn, a pair of needles and instructions to make a set of fingerless gloves.

For the event, Yarn on Front will be open from 9 a.m. to 6 p.m. on Nov. 10 to give away the kits and host free classes on how to make the gloves.

“The goal of this is to bring new knitters into the craft,” Nemeth said. “It is so cool that this is going on all over the United States. I’m really hopeful that this will bring in 10,000 new knitters and inspire people to get into knitting.”

Nemeth said the free event was a good way to entice people to try their hand at knitting, as the project is simple and beginner friendly.

“It’s good to have a hobby, and knitting is so good for your mental health,” she said. “You can put all your cares away and not think about anything and just knit and create something beautiful. I think that is so great and something that everyone should probably try once.”

Though she taught herself to both knit and crochet, Nemeth said she would have benefitted from an event like 10,000 New Knitters when she was first starting out, as she feels the free instruction and materials take away some of the barriers for new knitters to the craft.

“Being able to see and feel and hear makes it so much easier. It is so much different to learn hands on,” she said.

“This is something for everyone. It is not just for older people. In my opinion, if you are over the age of 9, knitting can be for you,” she said. “Come in and learn.”