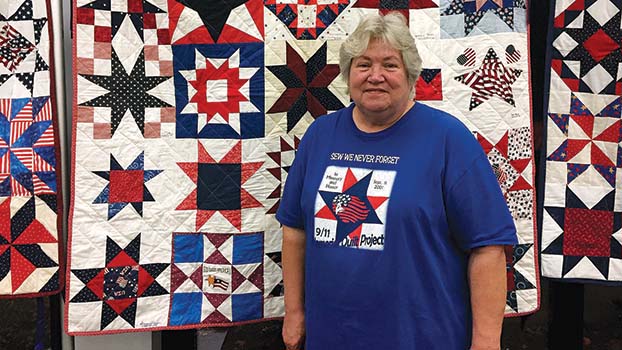 Beverly Kuemin stands in front of a panel that is part of the 9/11 WTC Memorial Quilt Project. The effort is to memorialize the lives of those who died in the Sept. 11 tragedy. Kuemin is helping to protect the quilts and display them at shows across the nation. (Leader photo/KELSEY HAMMON)

NILES — A Niles woman is helping to protect a collection of quilts, created to memorialize the victims from the Sept. 11 tragedy. As part of her mission, she is helping to exhibit the quilts around the United States.

Tuesday night, Niles community members got the chance to take a look at several of the quilt panels created for the 911 World Trade Center Memorial Quilt project during a presentation and exhibition at the Niles District Library.

Those who know Beverly Kuemin refer to her as “the keeper of the quilts.” Kuemin is part of Sew We Never Forget, a nonprofit that helps to preserve the quilts and exhibit them around the U.S. Kuemin and a project spokesperson, Judy Rice, of Niles, shared how the project got its start and the importance of showing the quilts around the U.S.

The first stitch in the project was inspired in 2001 when Amy Sue Leasure, of Prescott, Arizona, put out a calling for people to create quilt blocks to memorialize those who had died in the Sept. 11 tragedy. The project garnered international attention. People from around the world began to respond and more than 20,000 quilt blocks were created for the project. Each block contained the colors red, white and blue and incorporated a star design. For some, it was their first attempt at making a block, while others showed an expert knack in craftsmanship. Regardless, all blocks paid tribute to a deceased person from the tragedy by putting their name in the quilt block.

“They are all made with love and the thought of bringing someone some comfort,” Rice said.

A total of 300 panels were made utilizing only about 2,750 of the blocks. Other blocks helped to create quilts that were donated to first responders or to charitable causes.

After starting the task of putting the blocks together into panels, Leasure had hoped to take the quilts on the road and show them around the United States to show how tragedy had united people to remember those lost. But her dream was cut short when she lost a battle with cancer in 2002.

Fortunately, others understood the gravity of the project and sought to help Leasure’s dream live on. The quilts were first passed on to a man named Brian Kohler, who eventually passed the quilts on to Kuemin, after she saw them in Washington.

In 2014, Kohler sent Kuemin 30 totes packed with the quilts. Kuemin said she could not help but be drawn to the cause.

“I just kept asking [Brian] how can I help you get in this area?” Kuemin said. “It’s not mine to keep. I’m just holding on to it and trying to take it on tour, because that was Amy’s dream.”

In addition to preserving and showing the quilts around the U.S., Kuemin, who has been sewing for 20 years, contributed to the project by making several of her own blocks, which she said can be seen in panel 37.

Since taking on the project, Kuemin now helps to show the 300 quilt panels. She has displayed them at the Berrien County Youth Fairgrounds, as well as at shows in Indiana and Ohio. There has been some interest to take the quilts on an international journey, including a possible display in Japan.

Kuemin is also planning to begin a project of distributing letters to those who contributed a quilt block to let them know how it was used in the project. Kuemin plans to start the endeavor sometime this fall.

Those interested in finding out where the quilts will be next can visit the 9/11 WTC Memorial Quilt Project on Facebook to learn more.