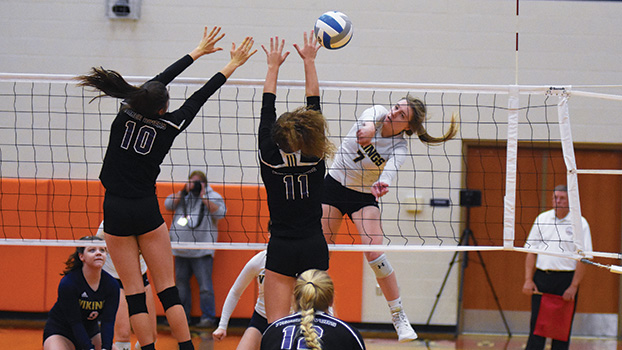 Abbie Harpenau had 25 kills for Niles in its win over Three Rivers. (Leader photo/SCOTT NOVAK)

EDWARDSBURG — When the MHSAA switched from classes to divisions in volleyball this season, two teams that won district championships last season ended up at the same site for this year’s tournament.

Host Edwardsburg and Niles were both Class B district champions under the old format in 2017.

The two are in opposite brackets in the Division 2 district tournament this season, which would mean that they could meet in a rematch of the regional title match from a season ago.

Dowagiac is hoping to derail that rematch when it faces the Vikings in the semifinals tonight at Edwardsburg.

Both teams advanced to the semifinals with victories Monday night.

First-year Dowagiac coach Tony Hooley and his team were on hand Tuesday night to get a look at the Vikings.

Hooley said that in order to be successful against Niles, his team will have to execute.

“Niles has two hitters in particular that play so high in the air, it will be a challenge for us defensively,” he said. “We will need to block better than we have all season. They are also fast on the floor and pass well. Offensively, our hitters will need to attack smartly and efficiently. They are a solid team and will not give us many second chances.”

Edwardsburg will take on another Wolverine Conference foe in Vicksburg at approximately 7 p.m.

The winners will meet for the Division 2 district championship at 10 a.m. Saturday at Edwardsburg High School.

The Chieftains lost to both teams during the regular season. Hooley feels that the Eddies may have the upper hand in the second semifinal.

“Edwardsburg and Vicksburg are both strong programs with great coaching,” he said. “With an older, more experienced line-up, and with the home court advantage, the Eddies should be favored, but you never know. That’s why we play the games. Sometimes you run into a team playing out of their minds good, and sometimes a team just can’t find their game.”

Buchanan a finalist once again for the ‘Battle of the Fans’