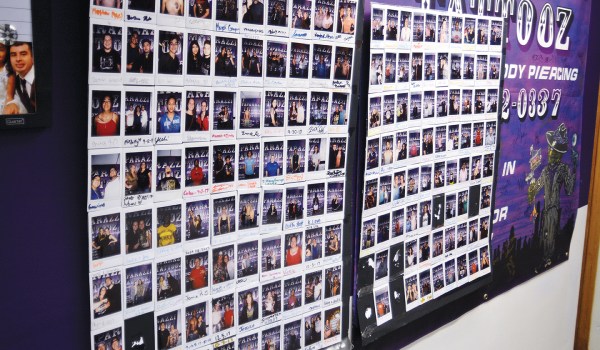 With an aim to treat customers like celebrities, customers have their picture taken after getting a tattoo or piercing. (Leader photo/KELSEY HAMMON) 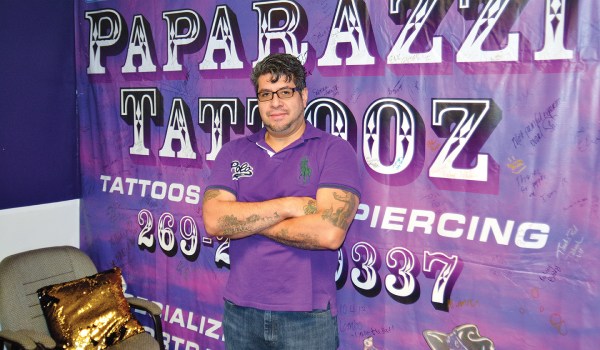 Business owner Pedro Rodriguez is pictured inside Paparazzi Tattooz. The business recently moved locations and will be kickstarting an effort to collect toys for children this holiday season. (Leader photo/KELSEY HAMMON)

NILES — Starting Thursday, customers who walk through Paparazzi Tattooz’s door to get some new ink or a piercing will also be helping a charitable cause.

For the past nine years, Paparazzi Tattooz owner Pedro Rodriguez has collected toys for those in need for the holiday season. This year, instead of collecting toys, the business will purchase a toy for each customer who visits between Nov. 1 to Dec. 21.

“Anyone that comes in to get a tattoo or piercing, you are contributing,” Rodriguez said. “It’s not even coming out of their pocket.”

The toys will be donated to families in need through a local church. Last year, Paparazzi was able to collect more than 200 toys, which Rodriguez gave to his church, Relevant, to distribute.

The collection period follows right on the heels of Paparazzi finding a new home near the downtown corridor. Two weeks ago, Paparazzi moved from its location at 408 S. 11th St. to their new location, 111 S. Fourth St.

“Thank God I found this spot,” Rodriguez said. “We like that we are closer to the downtown.”

Being near the downtown has allowed Rodriguez and his employees, who he refers to as Team Paparazzi, to participate in some local events. Last weekend, Paparazzi employees could be seen passing out handfuls of candy for the Downtown Trick or Treat.

As for the building itself, the space used to serve as a doctor’s office. Rodriguez said this is convenient because it provides office spaces for artists to work. The employees have already worked to personalize the space, which for Rodriguez means displaying a collection of dragon sculptures in his space.

Those who patronize the tattoo and piercing shop are likely to notice Rodriguez’s signature style. Besides the dragons, Rodriguez’s passion for the color purple is immediately apparent, from the color of the walls to the purple clothes he often wears. The color, he said, pays homage to his school spirit. Rodriguez attended Weslaco High School, where he was a student in Weslaco, Texas. The school color is purple.

Rodriguez got his start in the tattoo industry working at Nadwe Zibe Two, a tattoo shop that used to be located in Belle Plaza. Since his earliest days learning the ropes of the profession, he has become an apprentice to a number of other local tattoo artists that serve the Michigan and Indiana area.

When he had the chance to open his own business, Rodriguez said he wanted to make his customers feel like celebrities.

Building on this motto, Rodriguez snaps a photo of each person who gets a tattoo or piercing and the customer leaves their “autograph” on the wall of the business. At his former location on S. 11th Street, Rodriguez describes how the walls contained thousands of signatures. While Rodriguez and his crew have not been at the new location for long, the number of signatures is already starting to grow.

“If it wasn’t for our clients, we wouldn’t have a business,” Rodriguez said. “They are our celebrities. We are the paparazzi. It’s the clients who make us who we are.”

Besides his customers, Rodriguez commended his team of artists and employees, which includes about six people, for making the business what it is today.