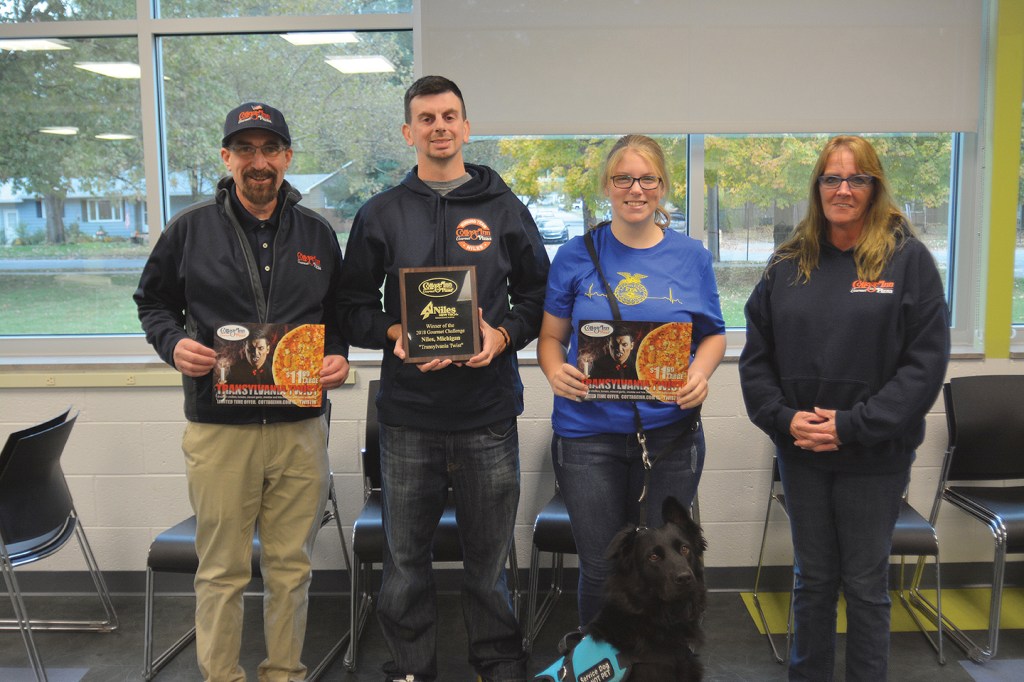 NILES — Those looking for a Halloween-inspired treat this week can get into the spirit with the Transylvania Twist, a pizza created by Niles New Tech students that has been available since they won a national contest.

Loaded with chicken, tomatoes, garlic and multiple cheeses, the pizza won over the taste buds of many, earning a first-place spot September. The recipe was created by Lily Jesswein, Maddie Crocker, Taran Shirk, Sarah Dunnen and Kyler Cole.

The pizza project was initiated in October last year, when Niles New Tech learners were tasked with creating a business model for a pizza recipe in their world studies course. Students’ recipes had to utilize a spice that they learned about while studying trade routes. After devising their recipe and creating a commercial to advertise their new product, students were then asked to present their pizzas to taste testers from Cottage Inn or Pizza Transit, depending on which class they were in.

Gary Sherman, a co-owner of the Niles Cottage Inn, said he knew he had stumbled upon a unique recipe when he sampled the Transylvania Twist. Sherman decided to sell the Transylvania Twist temporarily on the Niles Cottage Inn’s menu. The pizza became so popular that Sherman figured it stood a chance at winning an annual new pizza flavor competition that the corporation hosts each year.

The contest gives Cottage Inn restaurants a chance to debut new flavors and the pizza that garners the most sales wins and gets their recipe put on menus across the nation. The Niles Cottage Inn restaurant sold about 269 Transylvania Twist pizzas during the competition period, which took place throughout part of the summer, ending Aug. 31.

For her part, Jesswein said she was pleasantly surprised to learn that her Niles New Tech team earned the first-place award.

“There were a lot of people that had really good ideas,” Jesswein said. “I was like, ‘it probably won’t do too good.’ And then to see that is growing and has just kept growing is really cool and eye opening. To see it still going strong is amazing.”

Jesswein said she felt the project emphasized Niles New Tech’s mission to create hands-on learning. Getting the opportunity to craft an award-winning pizza is a chance she said she likely would not have had the chance to create had she attended another school.

World studies teacher Nicholas Hawley, who teaches the class alongside Emily Krassow, Maria Culbertson and Kristin Adams-Bondy, said it was great to see students applying the knowledge they learned to create something authentic.

“It was great to see learners interact with their knowledge and thinking from world history and English and integrate their marketing skills in pitching their product to Cottage Inn,” Hawley said. “It just shows the overall relevancy of the project.”

While the Transylvania Twist will only be on the menu through October, Sherman said the pizza could be placed on Cottage Inn menus permanently, depending on the sales. As of Friday, Sherman said there had been about 900 pizzas sold, but said he is optimistic that at least 1,000 pizzas will be sold by the end of the month.

This year, the pizza project returned to the Niles New Tech curriculum and Cottage Inn again served as a partner. Jesswein said she was excited to check in on fellow students and see what recipes they created this year.

While winning a spot on Cottage Inn’s menu did not hurt, Jesswein said creating something that could benefit a Niles business was a big reward.

“You’re creating something that can be used in the community,” Jesswein said.