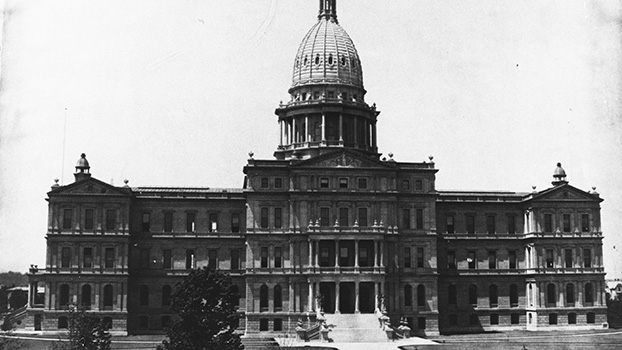 The Dowagiac Area History Museum will host a presentation on Michigan’s capitols and capitals on Nov. 7. (Submitted photo)

DOWAGIAC — The Dowagiac Area History Museum is inviting the public to travel back in time and learn the stories behind Michigan’s capitals — the cities — and capitols — the buildings — from Valerie Marvin, Michigan State Capitol Historian and Curator. Marvin will present “Capitals and Capitols: Michigan’s Odyssey From Detroit to Lansing,” at 6:30 p.m. on Wednesday, Nov. 7 as part of the museum’s Fall Lecture Series.

“Michigan’s current capitol, the state’s third, opened to great acclaim on Jan. 1, 1879. Students of Michigan history, however, know that the road to that day was a long and winding one, Marvin said. “When Michigan declared herself a state in 1835, Detroit — the state’s largest city — served as the seat of state government. The city’s hold on the capital was tenuous at best, though, as the 1835 constitution stated that a permanent seat of government had to be established in 1847.”

The debate to determine the site of the permanent capital city took place in the first capitol building in Detroit. They decided to make a site in Lansing Township the state capital — despite the presence of only eight voters in the township. The “temporary” capitol building in Lansing opened in 1847 and served its purpose for more than three decades. When the current capitol opened in 1879, Michigan finally had a proper statehouse.

Marvin serves as the Historian and Curator of the Michigan State Capitol. A graduate of the University of Michigan (bachelor of arts in Russian studies, 2005) and Eastern Michigan University (masters of science in historic preservation, 2009), Valerie lives in downtown Lansing and presents throughout the state.

Michael Frazier closes the series on Dec. 5 with A History of Dowagiac Schools From A-Z.

The November program is free to the public, but space is limited. The museum is at the corner of Division and W. Railroad streets. For more information, call the museum at (269) 783-2560 or visit dowagiacmuseum.info.