Dowagiac to be featured in comedy documentary 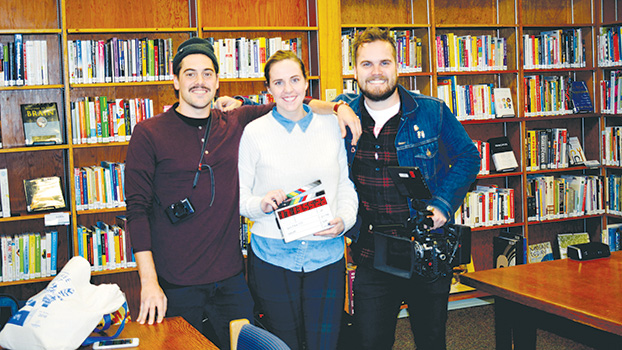 Hodgee Films is producing a documentary about the song “Who Let the Dogs Out,” in which Dowagiac will be featured. Pictured from left: sound specialist John Diemer, producer Aly Kelly and director Brent Hodge. (Leader photo/SARAH CULTON)

DOWAGIAC — Forty-five-year-old John Michael Davis can remember Dowagiac football’s 1990 run for state championship like it was yesterday. A member of the high school band at the time, he can still smell the sweat of the stands and can still feel the rush of victory. But more than anything, he can still hear the rallying cry of the season ringing in his ears.

“Oo, oo. Let the dogs out!” the Dowagiac Union High School alumnus chanted Thursday. “That’s what we would say, because we were the ‘dog patch,’ so we had to let the dogs out to win.”

Now, nearly 30 years later, the chant is being revisited and explored for a documentary about a song that was once ranked by Rolling Stone as the third most annoying song of all time.

The city of Dowagiac is being featured in an upcoming documentary chronicling the history of the 2000 Baha Men hit “Who Let the Dogs Out?” The documentary, which is set to be released in 2019, explores the story behind the song and the people and places around the globe that claim ownership over the phrase “who let the dogs out” — including Dowagiac, which is why film crews were in town last week interviewing Davis and others connected to the high school’s 1990 state championship.

The project is being directed by Brent Hodge and produced by Hodgee Films, a Canadian production company known for other comedy documentaries including “I am Chris Farley,” “A Brony Tale” and “The Pistol Shrimps.”

Aly Kelly, a producer on the project, said the documentary was inspired by a Brooklyn, New York resident, Ben Sisto, who has spent the last eight years of his life researching the Baha Men song, editing the “Who Let the Dogs Out” Wikipedia page and amassing a collection of more than 250 items relating to the early 2000s earworm.

“When we heard his story, we were immediately hooked and were like, ‘who did let the dogs out?’” Kelly said. “We knew we had to tell this story. Everyone knows the song, but we wanted to know the story. There are nine people who claim to have coined the phrase ‘who let the dogs out.’ We are interviewing all of them.”

Dowagiac’s role in the documentary came at the last minute, with Kelly saying that production had wrapped on the project when her team was contacted by Davis making Dowagiac’s claim to the phrase.

Ten years before the song “Who Let the Dogs Out?” was playing on radio stations across the nation, Dowagiac residents were shouting it from the stands during the 1990 season, when Dowagiac took home a state championship. The phrase was so widely used that it was printed on T-shirts and was referenced in an article in the Dowagiac Daily News on Nov. 26, 1990.

Davis claims to have started the trend, recalling a moment in the third game of that season when spirits were low. He said once the chant came from his mouth, it quickly caught on with the crowd at the game, and when soon after a touchdown was scored, the entire field was chanting “let the dogs out” with him. The chant would follow the Dowagiac football team for the remainder of the season.

That story, and all of its details, has stuck with Davis ever since. Once the Baha Men’s “Who Let the Dogs Out” was released, he said he recognized the phrase and began to tell others about how the phrase originated in Dowagiac. He even attempted to edit Dowagiac into the song’s Wikipedia page, but was unsuccessful. Now that Dowagiac is being recognized in Hodgee Films’ documentary, Davis said he feels validated knowing that he had some merit to his claim as author of “let the dogs out.”

“I felt like I had a part in it. That we all did. That Dowagiac did,” he said. “I always kind of knew that this story would be told. It’s great that it is now.”

Kelly said she was happy that Davis reached out and that Dowagiac’s story can be included in the documentary. Though it will be a comedy, as one might expect from a documentary about women asking “who let the dogs out?” in a club, she said the documentary will show the heart behind phrase and the stories of the people who believe they coined it.

“What I’m learning is that this was a heartfelt community effort [in Dowagiac], and that football is something that brought this town together,” she said. “I’ve never seen a community rally around something so strongly like an event or a sport. It’s no surprise that a rallying cry came from it and has lasting, universal effects. It came from a pure place.”

Both Kelly and Davis said they are excited to see the final product of the documentary. For Davis, he said his main hope is that when people hear Dowagiac’s story in the piece that they will be transported into those stands in 1990 and be able to feel the energy of a city on the brink of victory.

“It was a powerful experience for Dowagiac and shows the kind of community that it can be,” he said. “I think [the documentary] will really show what a group of people — a town — can achieve together.”