Dowagiac rallies to knock off Comets 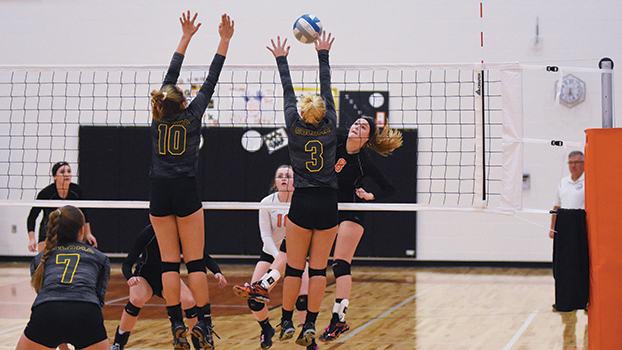 The Chieftains dropped the first two sets to the Comets in the new Union High School gymnasium, 22-25 and 23-25.

Dowagiac rallied to win the final three sets 25-13, 25-18 and 15-6 to pull out the victory and improved to 25-14-2 heading into Division 2 district volleyball tournament at Edwardsburg Thursday.

The Chieftains received a first-round bye and will face the winner of the Three Rivers-Niles match at 5:30 p.m.

“In our only five-set match of the season, the Chieftains battled back from two sets down to win in thrilling fashion in our new gym’s inaugural sporting event,” said Dowagiac coach Tony Hooley. “After jumping out to a 7-0 lead, we struggled to pass the ball and find an offensive rhythm. A couple of sets later the ladies starting controlling the ball better, committing fewer service errors and the rest is history.”

Dowagiac honored its three seniors prior to the start of the match.

Kelsey Crocker, Amiyah Smith and Grace Clark all played key roles in pulling out the victory.

“The seniors’ final home game of their careers was certainly memorable,” Hooley said. “They contributed much to this victory, the season’s 25 wins and best-ever finish in the Wolverine Conference.”

Clark finished the night with 33 digs, four aces, 19 receptions without an error and a team-high 2.21 passer rating.

Smith led the Chieftains with 19 kills.

Crocker, a four-year starter, hit 35 percent at the net and 96 percent from the service line. She also had 23 digs to go along with 12 kills.