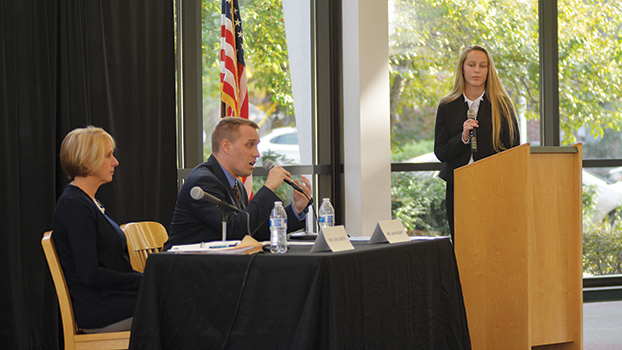 NILES — Niles New Tech learners set out to create a debate-style forum that would engage candidates in an intriguing, yet civil and fact-based discussion.

While they seemed open to criticizing their contenders, candidates vying for the 21st District state senate seat and the 78th District state representative seat, kept their civility in check during the debate Friday night at Niles District Library.

The event drew more than 100 people to gather in the library’s rotunda. Students invited residents to jot down candidate questions prior to the event. A select number of questions were chosen from the suggestions and moderated by students, who gave candidates a set amount of time to answer and rebut their competitor’s for state representative response if they wished.

The candidates included current State Rep. Kim LaSata and Democrat Ian Haight, both running for state senate and Republican Brad Paquette and Democrat Dean Hill, both seeking election. The debate was divided into two parts, with LaSata and Haight debating first, followed by Paquette and Hill.

In their opening statements, LaSata talked about her experience as a fifth-grade teacher, later describing it as the best job she had ever had. She asked voters to help make her the first woman to serve the 21st District as state senator.

For his part, Haight said he had become motivated to run through his experience as a township clerk, wanting to create a better relationship between government officials and constituents.

Candidates were asked what their solutions were for fixing Michigan roads.

LaSata said residents had only to look around to see that work is being done to better Michigan roads, as made evident by the many construction zones, she said. She also suggested a permanent infrastructure fund, but asked for a little patience from residents as progress continues.

“Let’s wait and see when we are done working on the roads where we are at,” LaSata said.

Haight disagreed with this attitude.

Haight criticized politicians for “kicking the can down the road” when it comes to making infrastructure improvement. He said state leaders need to use more efficient road technologies to create lasting solutions, rather than using something like chip and seal.

Candidates were also asked to talk about which of the three ballot proposals they are most excited about.

For Haight, said he hopes to see Proposal 3 pass, which seeks to provide options for residents to register to vote, such as automatic, Election Day voter registration, no-reason absentee voting and straight ticket voting. LaSata answered in stark contrast and said she does not agree with any of the ballots proposals. She expressed concern over Proposal 1, which aims to legalize recreational marijuana use, and how it could potentially impact auto insurance rates.

When it comes to improving the state of education across Michigan, Haight criticized current legislatures for putting “education under attack” and funneling money into pork barrel projects.

Both Haight and LaSata were also critical of the other accepting outside funds to fuel their campaign. LaSata said the DeVos family had supported her campaign because her mission is about helping children.

“Mr. Haight also accepts money from PACs outside of the district,” LaSata said. “Let’s be honest that is the great thing about campaign finance, it is transparent.”

While discussing affordable health care options, LaSata said she knows of many residents that struggle to afford health care. She said finding a way to make it affordable while covering those who have pre-existing conditions is vital.

For his part, Haight said one important part of saving tax payer dollars on health care is investing in preventative health care measures.

“For every dollar that we spend on preventative care, we save $7 in the end,” he said.

In their closing arguments, Haight said he did not care what political affiliation voters have, he said all deserve to have a voice in the state and this is what he said needs to change.

LaSata’s closing argument was similar in that she said she cares about what the voters want. She also emphasized her transparency, inviting voters to study her records.

State representative candidates were the next to take the debate stage.

One thing Hill and Paquette share is their experience teaching in either Berrien or Cass counties. The candidates both talked about how this experience shaped their campaigns. Paquette is a former Niles New Tech teacher, while Hill is a former Dowagiac Union High School teacher.

The audience chuckled when Paquette talked about how he was first hired to teach nutrition in Benton Harbor High School, because of his experience working at Taco Bell as a teen. Paquette accepted the job, equipped with only a box of pencils and Kleenex, he said.

“I seek out people who can do more with less,” Paquette said. “A box of pencils and some Kleenex, go teach. There are many educators that do that and I seek to find them and encourage them.”

Paquette said he is a Republican because he believes in less government and is a pro-life supporter.

“I want to empower people on the home front,” Paquette said. “I think there are specific roles for the government.

Hill also talked about his experience as an educator for more than 44 years. He went on to share how growing up in Detroit with little money and utilizing support programs influenced him to become a Democrat.

“When I was a child, my family did not have that much money,” Hill said. “Democrats will continue to keep those [social programs] open, because sometimes Republicans like to shut those down.”

“It takes time away from what we are supposed to be doing with the kids,” Hill said.

In discussing how to keep air, water and land clean, Paquette said he wanted to promote energy efficiency and energy independence, such as using solar energy. Though, Paquette said he is not for putting more restrictions on business, as he said he believes that EPA guidelines are enough.

Hill emphasized the need for keeping plastics out of the water. Like Paquette, Hill also mentioned sustainable energy, such as the turbine project that is in the process of being completed in Galien.

Paquette and Hill were also asked to discuss which ballot proposal they were most excited about.

Hill said he looks forward to the possibility of eliminating Gerrymandering, as discussed in Proposal 2, which is seeking to take districting power away from the legislature and put it in the hands of the people, through an established commission made up of people who identify as Republican, Democrat or no major political party.

“It’s at the whim of whoever is in charge of that process,” Hill said. “Republicans have done it. Democrats have done it. I would like to see it get consolidated. When I am knocking on doors, sometimes people don’t know where their district is.”

Paquette said he disagrees with Hill about Proposal 2 and finds Proposal I the most disconcerting.

When asked what they see as the biggest challenge facing Berrien County, Paquette said populations loss, he resolving high auto-insurance rates and mending the education system are key to keeping residents in Michigan.

For Hill, reviving industry jobs is a major challenge facing the county. He said finding a way to stimulate local industry will be key to fixing the county’s major problems.

In closing, candidates thanked students for hosting the forum. Paquette encouraged residents to get involved in their local meetings. Just as students sought to bring candidates together to talk civilly, Hill emphasized the need for people to unite with the common goal to fix issues.