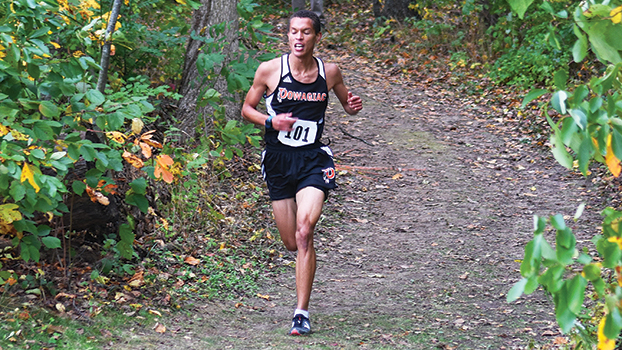 Little, one of the area’s top runners, posted a time of 16:03.78 and will now set his sights on the Division 2 state finals at Michigan International Speedway in Brooklyn next Saturday.

Little was the lone Dowagiac finisher in the boys race, which was won by Zeeland West with 30 points. Holland Christian as second with 96 points and Zeeland East third with 102.

Edwardsburg placed seventh with 179 point and Niles 11th with 287 points.

The Eddies’ Jack Leman finished third overall with a time of 16:25.90 to advantage to the state finals.

Adam Shepherd, of Niles, was 13th overall with a time of 17:00.04 and will run for a state championship.

The Vikings finished 10th and Edwardsburg 12th in the girls race, which was won by Holland Christian with 47 points.

Niles’ Kaylee Thompson placed fourth overall with a time of 19:40.19.

Buster Ward placed 10th overall with a time of 18:23.50 to advance to the state finals.

Ward, a sophomore, is in his first year of running cross country.

Lauren Anderson, a freshman, at Cassopolis also qualified for the state finals after finishing 12th overall with a time of 22:18.30.