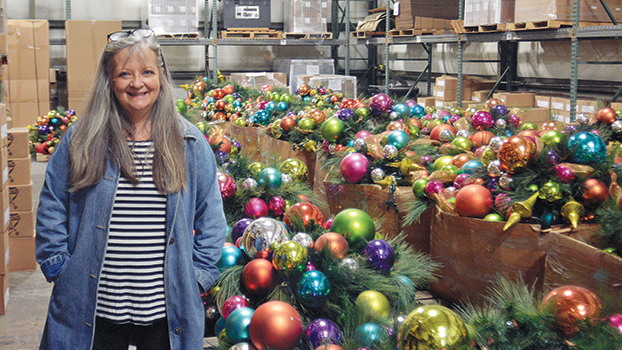 NILES — In a storage space in Industrial Park, it appears that the Christmas season came early.

Rows and rows of holiday decorations, colorfully accented with a variety of ornaments, are currently occupying part of French Paper Company’s warehouse, but the decorations will soon, find a new home along Niles’ downtown corridor.

The festive adornments were acquired by the Niles Main Street program. Lisa Croteau, the director of the downtown organization, said she heard that the city of Holland was looking to sell their Christmas decorations. A local foundation, which wishes to remain anonymous, donated $5,000 for their purchase. Holland had originally purchased the decorations in 2009 for $50,000, but decided to accept the offer, much to Croteau’s delight.

The decorations include more than 80 swags — holiday boughs intertwined with ornaments and Christmas lights —which are intended to be hung from lampposts and about 50 holiday wreaths, comprised of stacks of ornaments and topped off with a giant silver ball.

Shortly before Thanksgiving, M.A.A.C. Property Services of Niles will help to hang the decorations throughout downtown, adorning lamps with the swags and putting the wreaths in the planters.

“I think our town is going to look magnificent,” Croteau said. “They are so festive. They can stay up throughout the winter season and they will look beautiful for Christmas. They will also be festive for the Ice Festival. To be able to have [Holland’s] hand-me-downs is an honor.”

When Croteau went to pick the decorations up last Friday, she found that she got even more than she bargained for. Because Holland officials had been refurbishing and restoring the pieces every year, they had extra decorations to give Niles Main Street for no additional cost.

“There was a lot more there than we thought we bought,” Croteau said.

Croteau had cleared a storage space in Plym Park for the decorations, but that was before she saw the extra decorations that were included. With a truck loaded down with the decorations, Croteau was then challenged with finding a place to put them. Fortunately, a local Niles company stepped up to help out.

The company allowed Croteau to temporarily store the ornaments in its warehouse space in the Industrial Park area.

Croteau said she looks forward to having a new set of decorations adorn the downtown this holiday season. It has been about 14 years since Niles Main Street last purchased holiday decorations for the downtown. Croteau is not sure what will happen to the old decorations at this point, but is brainstorming some ideas.

As far as where the new decorations will go in the off season, Croteau said she is currently working with City Administrator Ric Huff to develop a solution. Croteau shared the news about the decorations during Monday’s city council meeting.

“We were in the right place at the right time,” Croteau said. “These were meant to be ours. It’s such a blessing. They are going to look beautiful.”

Croteau is asking for the community’s help to move the decorations so that the pieces can be buffed and shined prior to distribution downtown. Volunteers are being sought to from 9 to 11 a.m. Tuesday, Oct. 30, at the NECI building, 219 N. Fourth St, above the Leader Publications office. Those interested in volunteering can or call Croteau at (269) 687-4332. People are also welcome to just show up and lend a hand, Croteau said.

IDEA Week officials looking for participants for next year