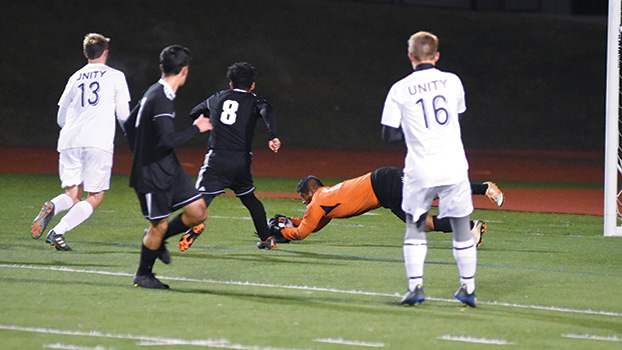 OTSEGO — The long and winding road of the Dowagiac soccer team’s seasons had many interesting twists.

Among the very first teams that the Chieftains faced back in August was No. 1-ranked Grosse Ile at the Kalamazoo Hackett Invitational.

The Chieftains’ season came to an end when No. 2-ranked Hudsonville Unity Christian shutout the Chieftains 8-0 in the Division 3 regional semifinals at Otsego High School Wednesday night.

In between, Dowagiac fashioned a 15-7-2 record and a second straight Division 3 district championship.

Despite the lopsided loss to Unity Christian, the Chieftains have plenty to be proud of this season, according to coach Mike Williams.

“It was a wonderful season,” he said. “That was what I was telling them (the players) at the end. This is one of the better seasons we have had at Dowagiac, especially with effort, improvement and teamwork. I expect it to get better next year.”

Williams said the Chieftains will have a fun final practice on Thursday before taking some time off to recover before heading into the indoor soccer season and weight room.

Unity Christian, who had a noticeable size advantage on Dowagiac, scored in the seventh minute on a goal by Chase Rozeveld.

Dowagiac would keep the Crusaders scoreless for much of the remainder of the first half, but in the final eight minutes, Unity Christian scored three times to take a 4-0 lead into halftime.

Logan Kunnen, Ethan Somero and Kadin Shaban tallied in the opening half to break the match open.

The Crusaders picked up some early goals in the second half to open up a 6-0 lead before Dowagiac settled down.

Unity Christian (20-2-1) would get the final two goals, the last coming with 10:37 remaining, to end the match by the mercy rule.

“Our game plan was to stay inside and covering,” Williams said.

“We were doing it, but as time went on you could see we were running out of gas and we did not have the subs to match up with what they had.”

The taller Crusaders also made it difficult for the Chieftains (15-7-2) to get the ball over the top and attack.

“They are big everywhere,” Williams said. “We are not big anywhere and we knew that was an issue, so the plan was to not go and win the first balls, but to win the second balls. In the first half we were doing that, but we lacked the numbers.”

Unity Christian will face No. 7-ranked Paw Paw, which was a 5-3 winner over West Michigan Aviation Academy, for the regional championship at 5 p.m. at Otsego High School on Saturday.