Hampton Inn & Suites by Hilton under construction in Niles Township 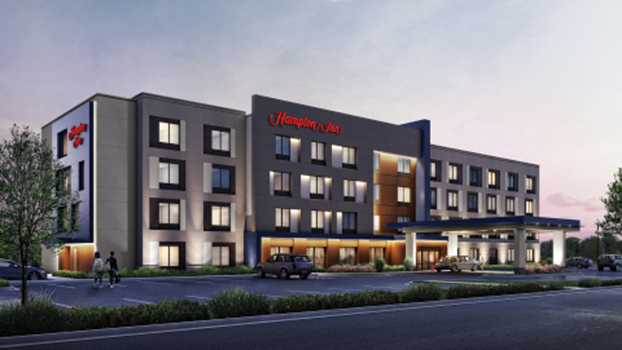 A prototype of the Hampton Inn & Suites by Hilton is pictured here. A hotel similar to the picture is under construction along S. 11th Street. The Niles building will be three stories tall, unlike the image here. (Submitted illustration)

NILES TOWNSHIP — Along S. 11th Street bulldozers and heavy machinery have been working on several new developments. Among the new businesses coming to Niles is a brand-new hotel.

Construction is underway for a Hampton Inn & Suites by Hilton, which will be located in the 1400 block of S. 11th St. Construction began several weeks ago and is expected to be complete in the fall or winter of 2019.

Sam Patel, of Granger, Indiana, will be the owner of the hotel. Patel is a member of GH of Niles LLC, a company that operates several hotels around the Michiana area. He said he expects the Hampton Inn & Suites by Hilton to take about 12 to 15 months to complete.

Patel said the hotel will offer modern accommodations to travelers looking to make a stop in Niles.

The Hampton Inn by Hilton will be three stories tall and include 72 rooms. Hotel guests will also have access to a pool and fitness center.

Among the modern amenities, Patel said there will larger TVs in each room. Wi-Fi and a business center in the lobby are some other features that will be made available. The design is modeled after a new prototype that the Hilton hotel industry recently revealed.

Patel said GH of Niles decided to bring a Hampton Inn to Niles after conducting a study that showed profitable business in the area. He said the study also emphasized that there is enough traffic to sustain a new hotel. He declined to say how much GH of Niles is investing in the building, due to the early stages of the project.

When the hotel opens, Patel said he expects to hire between 15 to 20 people to operate the hotel.

Berrien County is known for enticing many tourists to escape big-city life and participate in wine tours, apple picking and enjoy local restaurants and other business ventures, while Notre Dame also draws people from across the country to visit the Michiana area for football games and other big events. Now Patel said he believes the new hotel will help to fill a need for those looking to get the full Michiana experience.

Patel said he believes he has found the right market for the new business.

“It is a nice market for the building,” Patel said. “It is a sub-market of the South Bend area. We are looking forward to business.”